Richard Parker's News from Afar: Ezra Pound and Some Contemporary British Poetries is out! 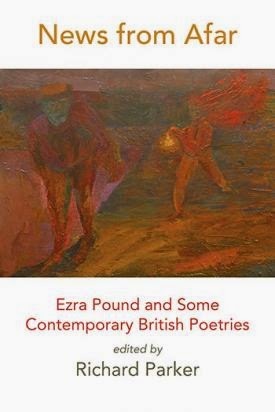 “‘…the full shock of what a fascist s.o.b. Pound is caught up with me’—thus Charles Olson after one of his several encounters with Ezra Pound at St Elizabeths Hospital. Olson’s “shock” has continued to reverberate in the work of many British poets as they have sought to weigh the dazzling innovative force of Pound’s poetry against the rash brutality of his politics. This has been a difficult and contradictory legacy, but one which, as this fascinating collection of texts so amply demonstrates, has also proved a spur to some of Britain’s best experimental writers in ways that we are only now beginning to appreciate.” —Peter Nicholls

I decided to respond to the Richard's request for a contribution to this book by having a go at versions and un-versions of Chinese poems by Li-Shang Yin that make use of the anonymous translations and the visual configuration of the Chinese characters, lineation and punctuation in the parallel text Three Hundred Poems of the T’ang Dynasty, possibly published in Hong Kong, which I bought in a charity shop. Further background and translations by A.C. Graham were consulted in eds. Cyril Birch and Dennis Keene, Anthology of Chinese Literature, Harmondsworth: Penguin, 1967. I wanted to testify to the continuing, but dispersed, presence of Poundian poetics in the broad understanding of contemporary ‘translation’ and spatial (rather than temporal) prosodies. Here is one of the poems from my contribution, 'The Li-Shang Yin Suite':

Posted by Robert Sheppard at 9:42 am