Robert Sheppard: article in CLASP: late modernist poetry in London in the 1970s (my part in its downfall) 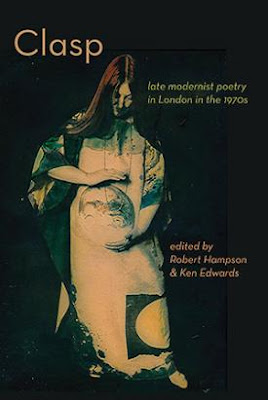 Last Saturday, in Leicester (see here), I picked up my contributor’s copy of Clasp: late modernist poetry in London in the 1970s, edited by Robert Hampson and Ken Edwards. (Details here.) It’s the sort of book I would review – if I weren’t in it, in two senses: things I did and said pop up here and there, and I have my say in the short piece, ‘Took Chances in London Traffic’. It is itself supplementary to other works of mine, as I explain:

My critical book When Bad Times Made for Good Poetry [Exeter: Shearsman Books, 2011; see here] is really a hymn of praise to the poetry scene in London from the 1970s to the mid-1990s, just before I came to Liverpool. [Another] chapter ‘Informing the Nation: The Manifesto of the Poetry Society (1976)’ deals with the well-documented events at the Poetry Society (and with the poetics document mentioned in the title)…. My chapter ‘The Colony at the Heart of the Empire: Bob Cobbing and the Mid-1980s London Creative Environmenteart ’ outlines the readings and performances I witnessed or of which I kept evidence. It’s a fulsome but not comprehensive account,

I state carefully, emphasing that I didn’t attend every event, although I do have the benefit of the diaries I kept, the same used to write my autrebiographical Words Out of Time, (e.g., see here for my diary account of meeting Bob Cobbing for the first time, an event that is glossed in the book in general terms).

This is a fascinating book of reminiscences of the 1970s, although it understandably strays into the 1960s (‘The British Poetry Revival’, see here). John Lennon's white suit is glimpsed several times, but only one contributor spilt tea over it! It also strays into the 1980s. (I was told to narrate until 1985 and I did this scrupulously; I had to: I only arrived in London in late 1983!) But it also wanders into the 1990s: there’s anachronistic mention of the deliberately unnamed workshop/discussion group Patricia and I organised in Tooting (and our big parties are mentioned as well). In Valerie Soar’s wonderful piece, she remembers an epiphanic moment of watching Bob Cobbing performing at the Smallest Poetry Festival in the World, which was held in our very small Tooting council house (though in December 1994). This slippage is inevitable (as is the way contributors step outside the ring of the M25 to tell us of other matters in other places) but it might make it harder to write of the 1980s and 1990s as distinct eras (as they were).

Of course, events around the Poetry Society are still up for debate, with Lawrence Upton (who wants to poke me in the eye for writing stuff like this, judging from his Basil Fawlty analogy!) on one side, Elaine Randell on the other, and Robert Vas Dias as the Piggy-in-the Middle. But the acrimony has abated, and I think we need to concentrate upon the creative work of that period and place.

John Muckle and I are the only two writers here who register a sense of not belonging to the ‘London scene’: both of us had wandered in from outside and both of us are at the end of the book, as the youngest contributors, and we recall the exclusivity of the scene that others don’t notice. They do register the gender bias, if that’s not a weak term for an almost complete absence of women, although Valerie, Paula Claire and Frances Presley offer strong accounts. It’s good to see Patricia Farrell’s role in SubVoicive acknowledged.

So: it’s not a book I can review at all. (Also see this interview between Rupert Loydell and me which pitches two versions of London in the early 80s against one another.)

One last thing: it almost seems as though in our search for accuracy, some of us have dodged trying to reflect the necessary excitement that derived from being in the compression of 'London traffic'. It takes another outsider, Jeremy Reed in his Shearsman book I Heard it Through the Grapevine: Asa Benveniste and Trigram Press, to get it right: ‘There’s something about the stupendous momentum of London’s energies that locks you into capital affairs.’ That’s what Clasp is about!
Posted by Robert Sheppard at 8:00 am