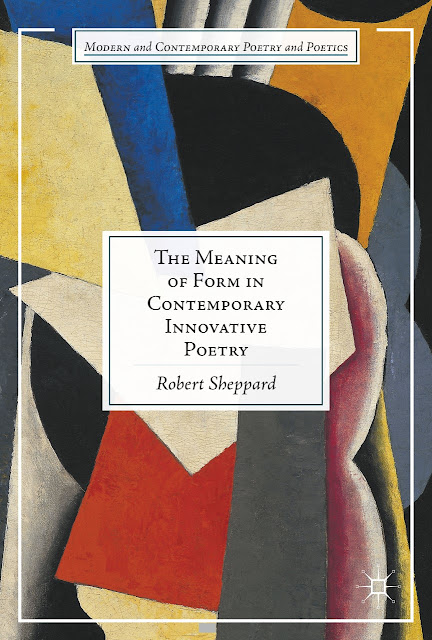 The Meaning of Form in Contemporary Innovative Poetry

My academic critical book is now published by Palgrave Macmillan. This has been a few years in the writing now and a few months in the production stage. It represents the culmination of my thinking about form, as I say in the Introductory chapter, and is guided by the opening formulation: ‘Poetry is the investigation of complex contemporary realities through the means (meanings) of form.’ This conjecture guides the theoretical accounts of form and the readings of (mainly British) contemporary poetry that follow in its chapters. The pun upon ‘means’ is intended to enact the supposition that if poetry does anything it does it chiefly through its formal power and less through its content, though it also carries the further suggestion that form is a modality of meaning in its own right.

This study engages questions relating to the life of form in contemporary innovative poetries through both an introduction to the latest theories of form that will be of interest to anyone concerned with reading for form, not just innovative poets and their readers, and which focusses upon form as an engaged action rather than metrical frame or pattern, and with reference to the work of Susan Wolfson and Derek Attridge, Angela Leighton and Peter de Bolla. Close readings of leading North American and British innovative poets, from Rosmarie Waldrop to Caroline Bergvall, Sean Bonney to Barry MacSweeney, Veronica Forrest-Thomson to Kenneth Goldsmith, Peter Hughes to Stefan Themerson, Allen Fisher to Geraldine Monk, emphasise their forms to be a matter of authorial design and readerly engagement. They cover form on the page, form in performance, and form in physical book-making. The book ends with a consideration of what has been implicit throughout: the politically critical function of formal innovation, mediated through the theories of Adorno, Rancière and others, and something that haunts throughout, the thought that form is cognitive, is brought to a tentative conclusion.

How does this fit in with previous studies I’ve written? They have demonstrated these various ‘turns’, though not I hope in any programmatic way: the linguistic turn of Far Language (1999); the ethical turn of The Poetry of Saying: BritishPoetry and Its Discontents, 1950-2000 (2005); and the historical turn of When Bad Times Made for Good Poetry (2011); though throughout there has been a concern for poetics as a speculative writerly discourse (although I never quite realized the project of writing a whole book on poetics: the possible chapters are scattered through other books, including The Meaning of Form), but see here for the first part of my main essay on the subject). Yet at another level I see these works forming a unity in terms of my larger project of the study of the forms and poetics of British (and associated) writing of an avant-garde persuasion. (See here for my recent thoughts on the connection between critical work, poetics production and creative practice.)

I am glad that it joins The Poetry of Saying as critical work of a strictly academic turn, although I am glad that overlapping essays in Far Language and When Bad Times Made for Good Poetry, books which are within the reach of the average poetic pocket, are still available. People sometimes misunderstand the nature of academic publication, about which I have some severe reservations (which I might share on this blog, but which I will limit on what is a bit of a celebratory occasion to the remark that this is to be my last purely academic book), but the fact is they are intended for scholars who have access to academic libraries and inter-library loan. (The demand for open access might change all that.) My answer to this imposed exclusivity has been to show the ‘working out’ of some of the chapters and parts of chapters (along with digressions, caprices, poetic effusions and – frankly – jokes) in posts on this blog, and they are arranged, for scholar and lay-person alike, at what I call a ‘hub-post’, i.e., largely a page of links to all the posts pertaining to the chapters of the book in its earliest form: HERE.

For the record, the chapters of the final book are as below, and I’m going to link one a day to the abstracts of each that I plan to post over the coming days. About half of it accounted for by now.

For those who can buy the book, or order it for libraries, here are the places to go to: