Little Albert returns for one night only

Here's Steve and me taking some tentative steps with Lou Reed's 'Perfect Day'. Our only rehearsals are actually playing at Maggi's New Year's (and other) parties, i.e., performing. Here we are at about 3.30 in the morning!

‘My Funny Valentine’, recorded croakily after too many hours singing, and a version of ‘Motherless Child Blues’ recorded earlier in the evening, in summer, 2015 may be viewed here.

Steve was the keyboard player and founder member of the Liverpool band The High Five in the 1980s and his latest band is gigging under the name Cat Sundies. I was the singer and harmonica player of Little Albert Fly. No expense was spared when Tony Parsons and I played the Shakespeare's Head in Hove: they didn't pay. But here's a sideways photo of me and Tony in 1977 or 1978, taken by M. Foy. 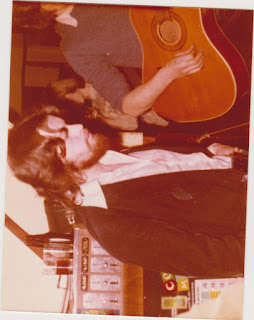 Tony and I may be glimpsed here when he was fifty performing 'Motherless Child Blues' with me reading a bit of my poem 'Smokestack Lightning', in 2006. I also performed the poem as a song-piece at the Bluecoat in 2008: You can access that here. The event was filmed by musician and poet Ade Jackson, who has worked with Steve. Small world!
Posted by Robert Sheppard at 8:00 am