I’ve heard from friend, poet and critic Helen Tookey (one of the Liverpool Firminists) that one of our best friends in the Malcolm Lowry community, Prof Vik Doyen, has died in Belgium. I am very sad about this. He was a very kind and good humoured man.

He edited Malcolm Lowry's 1940 Under the Volcano and the re-discovered Lowry novel In Ballast to the White Sea and had a long history of crucial critical work on Lowry, going back to the 1960s, I think, but he was a good friend of our annual Liverpool Lowry Lounge celebrations at Bluecoat. (See about the most recent here, and its links to previous years.) 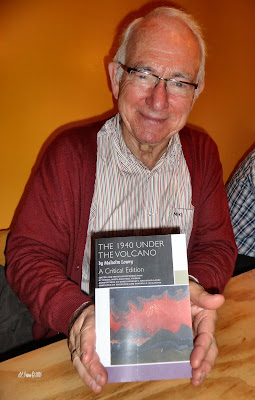 I want, though, to remember him for one more thing. As many of you know, my book A Translated Man (see this slow link here), purports to be the work of a Belgian poet writing in both Flemish and French (it was Vik who told me there was no such language as ‘Walloon’). The fiction includes the ‘editorial’ role of Erik Canderlinck (see the draft for what became his introduction, here). I located my Erik as formerly (I was hinting he was removed from his post) of the University of Leuven. Of course, I would never meet anyone from Leuven, let alone from the University! Then (in this other, Lowry world) along comes Vik Doyen from that very institution, and, at the end of one of our Lowry years, I plucked up courage, and gave him a copy of the book.

The following year (and in subsequent years) he was astonished that I had been able to recreate his colleague (he named an individual) from the university so well!So well, he insisted, that I must know him. I did not. And we laughed.

Of course, this is one of the ironies of the creation of fictional poets. Like Bob McCorkle in Peter Carey’s wonderful novel My Life as a Fake they turn up and find you. Or nearly, in this case: as Vik knew and loved and laughed with me about it. It’s unthinkable to imagine a future Lounge without him for this (and many many other) reasons. I have written myself into sadness. And shall stop…

Posted by Robert Sheppard at 5:55 pm