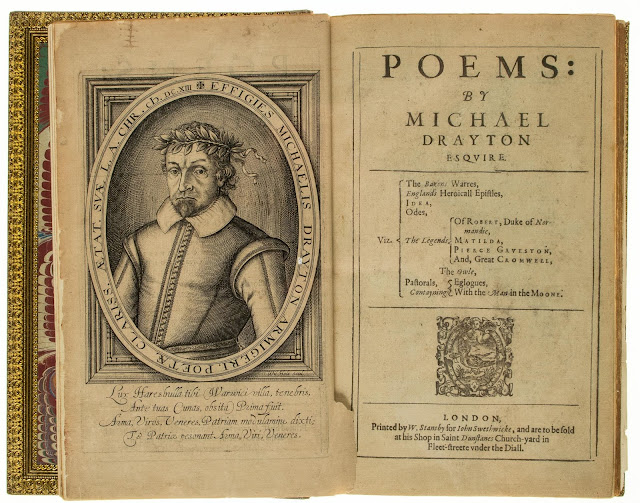 You know what’s happened, if you’ve been following my temporary posts. I’ve long run out of the sonnets of Michael Drayton from his 1619 Idea, which I had been using to write my sonnet sequence Bad Idea, the latest part of The English Strain. I thought Brexit would be over before I’d written all of its 64 poems! Instead, I reached the start of October 2019. I write about it extensively (with lots of explanation, photos, and links) in the hub post HERE:

Despite the various schemes outlined in that post, I’ve continued this Brexit work with Idea’s Mirror, using selected Drayton sonnets jettisoned on his way to the definitive 1619 edition, accessing the literary equivalent to the record collector’s ‘completism’. The narrator is Idea herself, Drayton’s shadowy muse (although the Muse –capital M – is also separately addressed).

The poems are shorter in ‘Idea’s Mirror’ than in ‘Bad Idea’ and less may be negotiated, though more fleetly. They may allude more, but refer less. But with an election nearly upon them, with a Flexibrexnextension accepted by the EU (remember them?), it was not clear how long this work would be. I’ve been trying to think that through. Does this sequence finish with the election, with Brexit, with a referendum, or revocation? I asked myself. I wrote about the first poem here:

It all depended on who won the election. (For the sake of a very battered posterity, I turn to the possibilities at the end of this post, preserving my last thoughts before that catastrophe.) By the end I had more or less decided that there would be 14 ‘Mirror’ sonnets (a common measure in ‘The English Strain’, derived from the ancient sonnet cycle, the corona). That left me a single post-election poem, i.e., the one I wrote this morning. I needed to get in the post-election fatigue and feeling of hopelessness. A three day hangover helped! And I knew Idea would fade away, though actually she’s given posthumous life too, and hope.

The final three poems have been published in International Times and may be read HERE.

Update 2021: I’m delighted to announce that Bad Idea, with 'Idea's Mirror' in it, is available NOW from Alec Newman’s excellent press Knives Forks and Spoons, with a cover design by Patricia Farrell. You may get it HERE:  https://www.knivesforksandspoonspress.co.uk/product-page/bad-idea-by-robert-sheppard-102-pages

As I say, I have selected these poems so that they move (backwards) through the various editions of Drayton’s poems. The originals are pretty rare, which is why I’m posting each here. And the 14 that I selected are gathered HERE.

Today's model is 'Amour 9' which ends:

Where shee remaines for all eyes to behold.

For the end of ‘Idea’s Mirror’ I moved on to the many poems in the original Idea’s Mirrour published in 1594. 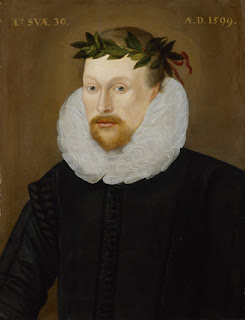 The first epigraph to the sequence

Amidst those shades wherein the Muses sit,
Thus to Idea, my Idea sings…

derives from, ‘To Idea’, in E N D I M I O N and   Phœbe , IDEAS LATMVS. This is drawn from the Renascence Editions text, which was transcribed by Risa S. Bear, November 2000, from the edition of 1595.‘Endymion and Phœbe,’ n.d., 4to, entered in the Stationers' Register, 12th April 1594. Though I might re-visit this poem to bid farewell to Idea when the time comes (with a gin and tonic I hope, for her).

To return to my thinking about the sequence here are some about the effect of the election, written before the event:

There are only 4 possible outcomes of the election. They suggest 4 outcomes for both ‘Bad Idea/Idea’s Mirror’ and for the whole of ‘The English Strain’ project (again, see this hubpost for a full account: https://robertsheppard.blogspot.com/2019/09/on-bad-idea-and-reference-to-earlier.html ).

1.A Bo Majority. Brexit will happen quickly and Idea’s mirror will be shattered, as would she be. Right wing policies: magic police and nurses. The poems would stop, I think. At 14 maybe, just post-election. Maybe time to move on to the Wordsworth poems mentioned in the hubpost? Even take a short break. I admitted to Brexit-fatigue the other month, in my diary. Yes, even me, and possibly Idea too! And doubtless, gentle reader, you also. Or I could go back to the voice of ‘Bad Idea’ and carry on with the many 1594 sonnets that still remain. Remain!

2. A Corbyn Majority. Re-negotiation and a further referendum. And a manifesto I think I fully agree with. Nationalise Sewerage! Idea would be much more hopeful under this scenario: perhaps she could carry on with her Braidottiesque deleuzoguattarianism (i.e., her unfashionably utopic politics, or the ‘politics of kindness’ as she calls it). But only to poem 14, in current plans. But her ‘mirror’ would not be shattered. She’d give it a polish, I’m sure.

The last sonnet of ‘Idea’s Mirror’ would be celebratory, cautiously so, and it wouldn’t be clear what I would do after. Have a break? Get back to my ‘microfictions’ maybe? All the stuff I’m writing that I don’t post?

The Wordsworth poems could only be transposed if the referendum vote was to Leave. I can’t believe a second referendum (we shouldn’t have any in a representative democracy) would be less rancorous than the first. Though the anti-immigration line has weakened, now people realise how the NHS, for example, is dependant on migration.

3 A Bo Minority administration. Could Brexit be delivered? If not, what poems by Idea (or another?) could track the chaos? And for how long, or for how many could I carry on? But mirth would be possible, although it would be ‘deja vu all over again’! Just re-read ‘Bad Idea’ to get the gist! This would perhaps justify returning to the ‘voice’ of ‘Bad Idea’ to sandwich the brief election corona of ‘Idea’s Mirror’. That would work, I think.

4. A Corbyn Minority administration. This is a distinct possibility, according to John Curtess (sic, I think I’ve spelt the distinguished cephologist’s name incorrectly, and his profession’s?). Could Brexit or a referendum be delivered? If not, what poems by Idea (or another) could track the chaos, the breakdown, the compromises? It’s not predictable.

I was left in the odd position that politically I really want the outcome to be 2, but that 1 or 3 suits the poetry better. Like MPs, I needed to put country before party … I mean: country before poetry!
There is a fifth outcome for the poems, of course. Which is: ‘The English Strain’ will end at the end of ‘Idea’s Mirror’, heeding Miles Davis’ advice, ‘End your solo before you’re done.’ Especially if I feel everything’s been said. Or left unsaid (as the empty lining of poem 13 suggests).

However, just as the ‘Brexit’ theme developed out of the ‘English Strain’ poems (it appears towards the end of ‘It’s Nothing’, when I made a joke about the word ‘Brexit’, which I thought might need explaining like ‘stagflation’ or other temporary and ex-contemporary expressions)), ‘The English Strain’, in its versioning of canonical (and not so canonical) sonnets, need not be completely stuck on the Brexit theme. It is as much a formal exercise as a thematic one. And an historical one.

I still feel the lack of transpositions of Romantic sonnets. Then I’d be through. I’m too fatigued to contemplate a third book of The English Strain at the moment, but it’s a possibility and a possibility I am registering here. (All my thinking about the sequence has been on this blog, not in my poetics journal, oddly.)

Best now to look up the eight online poems from Bad Idea that may be accessed from this post:

I would like to acknowledge the weekly interaction with the poet and reviewer Clark Allison, who has not failed to email me about these temporary posts. It really became part of the process – as was blogging itself, as was also noted by Jamie Toy, who writes about the periodicity of my weekly posts in relation to the temporal progression of Brexit here, in Versopolis: https://www.versopolis.com/arts/to-read/792/moving-but-also-staying-the-same

Of course, Corbyn wasn't actually mugged by hares. I'm glad I was too busy celebrating Patricia's birthday to attend to the election, staying up all night (as I usually do). So far as I can see Labour lost because of 3 factors:

Brexit (their message was too complex, nuanced if you will, but unlikely to clearly appeal to voters. I don't know what a simpler message might have been. Leave wouldn't have worked, neither would remain.)

Corbyn (he never appealed on the doorstep. Negative press didn't help, but it can't just have been that. I have friends who don't like him, but who can't put their finger on it why. Another claims he's not very bright. I thought he was a principled man, but that doesn't count for much, I suppose.)

Policies (I liked the manifesto but I don't think it was sold. Privatising the railways is popular, ditto water, but probably not leccy and gas. Don't Sell the NHS was a hyperbolic slogan that was burst by Trump's refusing the NHS, even though the real risk of inflated prices from US pharmaceuticals is still there.)

Posted by Robert Sheppard at 12:09 pm