Out now from Veer. Two booklets and a card introduction in a box! HERE 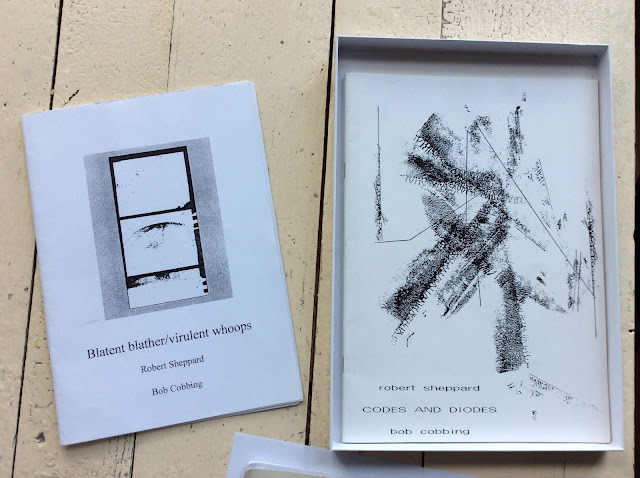 “Reprints of two collaborations between sympathetic but rather different disturbers of the poetic peace. As detailed in Sheppard’s illuminating Introduction, the first – Codes and Diodes - started with his poem for Cobbing’s 67th birthday; after another a year later Cobbing’s reworked response followed within days. Occasional exchanges continued till Christmas 1990 in the form of “flick-book ekphrasis”, cut-up and collage. - Sheppard:

invention takes off apparently unstoppably through to an enigmatic conclusion '(end)uring freedom / in / (fin)ite j(us)tice'. Most of the personal pronouns appear in brackets like parts of mysterious encrypted messages still afloat on the relentless swirls of language."
- Adrian Clarke

You may see me demonstrating how the box opens and the books spill out here!

The box format is appropriate to the fact that the first text in Codes and Diodes was also an introduction to Cobbing huge box publication Processual, one of Cobbing’s most important works. We just carried on from there. Here's one of my poems from that book, 'Verse and Perverse are Both Verses'.

As I write of the second pamphlet here, in the introductory three page essay included with this publication:

My second co-authored piece with Cobbing, Blatent Blather/Virulent Whoops, conceived as a whole from the beginning, unlike its predecessor, falls into [the category of to and froing collaboration] (though falling into any category at all was clearly something that we were intending to avoid). The exchanges were conducted ‘to and fro’, via the post, between July and October 2001. I remember that Bob suggested that it was about time we wrote another collaboration at some point, and we must have discussed it at one of our still quite frequent meetings, even though I was living in Liverpool by the turn of the century. We established only one rule: we would each write 3 lines (or groups of 3 lines), then post the results to the other for response and continuation. One working title was ‘Over to You’.

A video of Patricia Farrell and I reading a revival of the text at The Other Room is visible on The Other Room website. (See video here: https://otherroom.org/videos/or-35-bob-cobbing-a-celebration/) 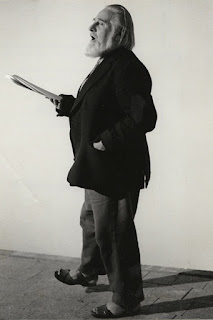 I write about Cobbing a number of times on this blog; see here: 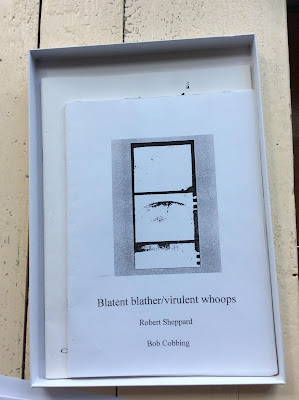 Soon after finishing Blatant Blather/Virulent Whoops I found myself with the sad task of writing Bob’s obituary for The Guardian (which may be read here: https://www.theguardian.com/news/2002/oct/07/guardianobituaries.booksobituaries

I also write about collaboration in general (see here

My previous prose book from Veer, Unfinish, my be read about and bought here: