Robert Sheppard: The 'War on Terror' : my 'Warrant Error'

I wrote a book called Warrant Error round and about the ‘War on Terror’. 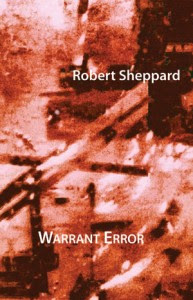 It seems the right time to remind people that it is still in print, from Shearsman, here: Shearsman Books buy Robert Sheppard - Warrant Error

It seems the right time because, on Sunday 5th,  I heard a feature on the World this Weekend that completely failed to mention that any Afghans, Iraqis, or others were killed in this ‘War’. Since they claimed to be explaining the terrible events of 9/11 to those who weren't born then, they clearly failed in some duty. Of course, my poems don't 'explain' in that way.

There are a number of samples from the book online. They include:

The introductory three poems (they are not sonnets like the rest) may be read on Intercapillary Space here.

The book overall is ‘round and about’ the War on Terror since I try to write about more positive qualities in the ‘human covenant’.

Here's one that I don't think I selected for History or Sleep (where you can read a select grouping of these sonnets, which works well as a sampler). It's 'round and about' the only personal involvement I had in the 'War': a bit of rubbernecking in a local street where a suspect's (unfortunate) brother lived, and had his house searched (they found nothing). I like the identification of  'global' warming and warning in this extremely 'local' poem.

And I read a run of them on the ‘Archive of the Now’ audio site: sheppard-robert_september-12_brunel_2006.MP3

Posted by Robert Sheppard at 7:00 am