Robert Sheppard: How I selected History or Sleep: Selected Poems 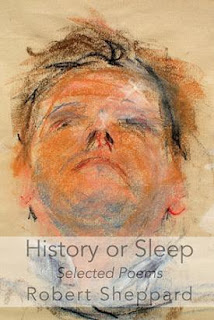 I have been explaining quite a lot on this blog, here in particular, about the de-selection of poems from History or Sleep: Selected Poems, my second book of 2015, just out. More here, too.


I’ve said very little about the process of selection, though. I didn’t have a policy or guidelines, although, even while I was preparing the text of Complete Twentieth Century Blues in 2007 or thereabouts, I was compiling lists of candidates for a possible ‘selected poems’, and I found I had other, earlier, lists to add them to. These helped, because consensus over choices probably indicated the right ones to pick. I didn’t ask anybody else to help, not even Patricia, though Scott Thurston, when presented with the contents, rattled off a list of unrepresented works. ‘Space,’ was the excuse for most of the omissions.


I wanted to be representative of different works, styles and periods (!), as well as obviously showing what I imperfectly judged to be the best work. I favoured short pieces over long and (taking my cue from Peter Hughes’ Shearsman ‘Selected’) I wasn’t afraid to excerpt from longer sequences to increase representation. I had to.


(Indeed that glyph is the 14th part of ‘Twentieth Century Blues’, the poem ‘Untitled’ in its entirety.) The way the strands work can be seen, if you have the index, in History or Sleep, in the ‘Empty Diary’ poems, both within the ‘Empty Diaries 1901-1990’ sequence and beyond. More obliquely, ‘Empty Diary 1990’ is also ‘Internal Exile II’. ‘The Materialisation of Soap 1947’ is the fourth ‘History of Sensation’; ‘Mesopotamia’ is the first in that strand, while ‘Killing Boxes’ is ‘Mesopotamia 2’, but it is also ‘Melting Borders 2’, and thus linked with both the poems of those titles (at least). And so on.


For the selection in this book, though, I thought it best to omit this numbering and the index, while acknowledging its role in the writing, and its uses to the reading, of the poems. And also to reduce the impeding of the reading process, if the reader is new to my work. It seemed better to present separate poems as discrete entities (although there are series there).


The poems are arranged in broadly chronological order, and I’ve put a newly recovered poem up front, from 1983, ‘Round Midnight’, a poem about Stan Tracey playing Thelonious Monk. (See here.) It sets the tone. I’m also pleased that the book ends with one of Sophie Poppmeier’s supposed poems (fictional poems supposedly written by a fictional poet (see here and here for that on-going work!)): ‘Book 1 Poem 1’. In my end is her beginning (if that doesn’t sound too rude). (It does.) The book opens with chaos and invention; ends with changing one’s life.


The appearance of a number of poems in both Tin Pan Arcadia and Complete Twentieth Century Blues allowed me to be more severe with their de-selection and this accounts both for selections (or the lack of them). These poems have been seen quite a lot.


One for William Carlos Williams


from The Hungry Years: an Unwriting


The Materialisation of Soap 1947


Coming Down from St George’s Hill


Only the Eyes are Left


from Reading The Reader


As Yet Untitled Poem


The Given, part one


Fictional Poems from A Translated Man : from The Masks; from The Light; from EUOIA.

I hope that you will want to buy the whole thing. Here.

There is a review of the book, by Steve Waling, here. A set list of one of the launch readings and links to further reviews here.