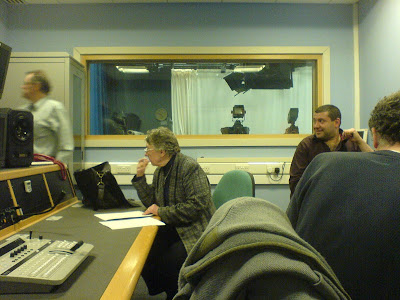 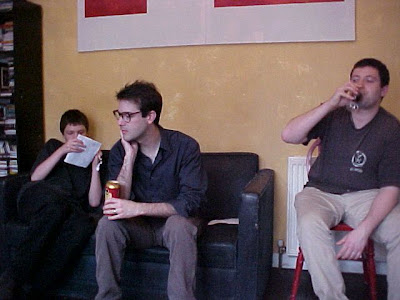 To celebrate a decade of the discussion of speculative, writerly poetics at Edge Hill, Robert Sheppard organised a talk series entitled Going Public this autumn and turned over this now concluding fifth series of this blogzine to the work of his group. (Above you can see Stephen Sheppard, Scott Thurston and Matt Fallaize in the earliest photograph of the group during a contemplative moment at one of its summer meetings, probably 2003. Photo courtesy Andrew Taylor. And above that a photo of group members Robert Sheppard, Angela Keaton, Matt Fallaize and Cliff Yates at the recording of the group's CD, Points of Reference; available £5 including p+p from Robert Sheppard, Deaprtment of English and History, Edge Hill University, Ormskirk, Lancashire, UK. Photo courtesy Andrew Taylor.)
The whole series launched the Salt poetics anthology Troubles Swapped for Something Fresh (edited by Rupert Loydell from Salt Publishing); four of the group are featured in this volume. On 8th October Scott Thurston discussed his book Internal Rhyme to be published next year by Shearsman, sharing with the audience the two ways of reading the text (horizontally and vertically). The discussions, as on all the evenings, were detailed. This was also a chance to celebrate the new Journal of British and Irish Innovative Poetry, co-edited by Sheppard and Thurston, the first issue of which was on sale.

On 15th October, two former PhDs of the university, also founder members of the group and contributors to Troubles Swapped for Something Fresh, and widely published poets, presented their poetics: Cliff Yates: ''Flying' and the gap between intention and outcome in the act of writing,' and Andrew Taylor on ‘The Poetics of Absence – part two’: a continuation and reflection upon the work in Troubles Swapped for Something Fresh. Andrew spoke of how a poetics is never finished just because a document of poetics is complete, but continues to evolve, in his case developing his sense of a topologiocally-inscribed 'Poetics of Absence'. Cliff outlined his development from a poet who writes about experiences to a poet who allowed the writing of the poem, in the act of writing, to become the experience. (Again, see his contribution to the Salt anthology.) More recent pieces explore a translatorese-ish estrangement of language, refracted through broken forms such as pseudo-pantoums.
On 29th October Dee Mc Mahon spoke of the poems published on her CD Stories of the Line under the title ‘Provocation, Process and Product’. Dee described her sequence of prose pieces that springboard from quotations 'Stories of a Line', in which - Klee-like - she takes a 'line' for a walk. Robert was talking about his latest project, the fictional poems of Rene Van Valckenborch, and the double fictional poetics by which they are permitted, and by which he is permitted to by-pass his self.

On 5th November 2009, Daniele Pantano addressed the title "Living in Translation: A Discussion of Exile, Translingualism, and Writing Your Way Home" by speaking of his own original work and his work as a literary translator. Michael Egan meanwhile invited the audience to share his recent ‘Motivist’ poems in light of his Motivist Manifesto. If it catches on, you heard of it here first!

To complete the series on 11th November 7.30 in The Rose Theatre, Cliff Yates launched his new book Frank Freeman’s Dancing School (which is out from Salt: www.saltpublishing.com/books/smp/9781844715039.htm) The speakers from the talks series became the support act for Cliff, who read well and contextualised the writing of his book.

On 27 November we ‘went private’ again by meeting up at the delicatessen Source in Ormskirk run by PPRG member Matt Falliaze (pictured above, even then sampling the wine) for an excellent meal. It made the group feel more like Oulipo (I had Queneau's Elemental Morality in my bag) but I suspect we'll not become a dining club, though I'm sure we'll return to Source. We were there to celebrate not to discuss, but we did touch on the subject of how to proceed as a group, and how to avoid the banalities of the 'workshop method'. Present were the founder members Cliff Yates and Andrew Taylor and myself (I think it was only a joke when they voted me out of the group!), Dee MacMahon, Michael Egan, Patricia Farrell. Everybody seemed relaxed and enjoyed themselves. Great Works currently features three of the group. And everybody round the table has been published there. Thank you Peter Philpott!

We have two official journals registering the group’s work: Pages online published work from the group members Erbacce published a print edition dedicated to the group (which may be bought at http://www.erbacce.com/)

Here ends the Fifth Series of Pages. Check the archive between May and November 2009 to read the series whole. (For a quick look, the bulk of the meetings occured in October 2009.)