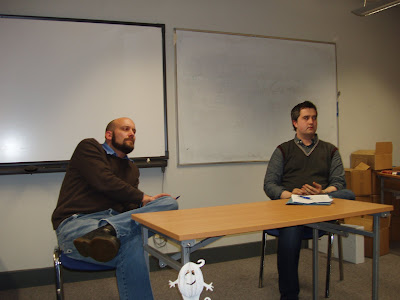 Dan spoke to the title 'Living in Translation: A Discussion of Exile, Translingualism, and Writing Your Way Home'. Home might or might not be Switzerland, in Dan's case, and he explored the polylingual background of Switzerland, his sojorn in the United States, his writing in English and his translating from the German. He quoted Richard Kearney on Ricoeur's On Translation: 'The idealist romantic self, sovereign master of itself and all it surveys, is replaced by an engaged self which only finds itself after it has traversed the field of foreignness and returned to itself again, this time altered and enlarged, "othered".'

Michael introduced us to the tenets of 'Motivism', a style of poetry (or a schema for generating a long sequence of poems), based around a verse form of 1/3/3/1 lines and a series of guiding principles for each stanza: initial image, wandering, connection, and return.

This is final talk in the series but Cliff Yates (supported by the team of 'talkers') will read at the Rose Theatre, at Edge Hill University on Wednesday 11th November at 7.30: tickets £3.50 for the launch of his book Frank Freeman's Dancing School (Salt).