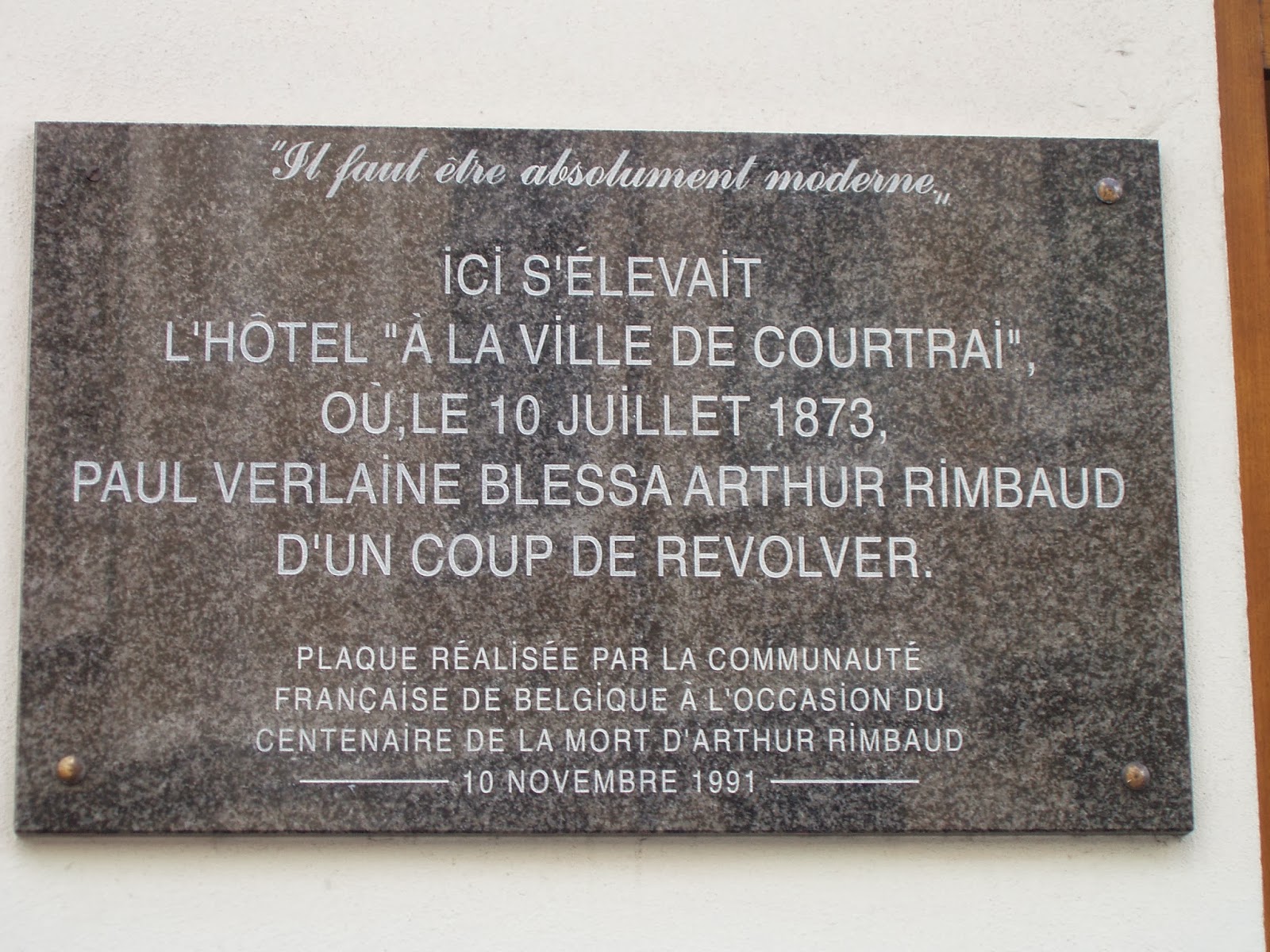 This posting follows the previous one (read it here)

Rimbaud is everywhere in the poems but as indirection. ‘The Letter on Poetics’ at the end explains how he politicises Rimbaud’s poetics. As he says in an interview (a good one, here):
the “systematic derangement of the senses” has to mean the social senses, the world turned upside down. And then the very fragile, damaged nature of his later work seems to me to be linked to that, in that it’s coming out of the pain of that collective subjectivity returning to an isolated, personal one. (Bonney nd)
Bonney also describes his writing method, which contrasts collection with selection, improvisation with revision:
Pen to paper. I accumulate materials in my notebooks – like I’m sure most people do – notes from reading, little bursts of things and so forth. Eventually it’ll reach a critical mass, and I’ll sit at my desk, the notebooks open, and improvise off them straight onto the laptop. Usually a very fast process, followed by a careful period of revisions and so on. Probably more or less the same as what everyone does. (Bonney nd)
(It is interesting that Bonney assumes this is a common method of composition. It probably isn’t, though I recognise it as analogous to my own methods and know of other ‘linguistically innovative’ poets for whom this would be a familiar methodology.) The result is a particular kind of energised text, urgent but collagic, gestural but considered. Ian Davidson (writing of other, but contemporary, poems to Happiness by Bonney) offers an almost apologetic formalist reading of the poems and notes the force of the words in their iterations:

Words form constellations and seem to spin around each other, gathering together in clusters in order to sustain a number of diverse meanings. The emphasis on form and discussion of poetic processes and their applications tends to suggest that the poem is self-consciously “about” the writing process itself. Yet the poem is also “about” other things, things that can be hard to trace through the fractured patterns of the poem. (Davidson 2010: 37­)

While it is indeed a critical default mode to read a poem as being about itself, and while it is strictly true that every poem is a formal model for itself (particularly the more formally investigative or non-formulaic it is), in Happiness one of the ‘other things’ that the poems pattern intuitively are the poems of Rimbaud themselves, fragmented into quotations, variations, translated portions, and possibly picked out of the ‘notes from reading’ in Bonney’s notebooks for further work in improvisatory extension. One notable aspect of the poem (which could arouse the suspicion that ‘the poem is self-consciously “about” the writing process’) is the prevalence of linguistic particles. ‘We were nouns,’ announces one poem. (Bonney 2011: 39) ‘There we have a series of verbs,’ (Bonney 2011: 12) or: ‘an adverb/ think of adjectives as refugees’. (Bonney 2011: 26). When there are so many direct political statements of intent in the poems, indictments and incitements – ‘When you meet a Tory on the street, cut his throat’ is one of the most notable, a nail being recommended for the Foreign Secretary of the day’s skull is another – it seems odd to concentrate upon such abstracting lines. But time and again, the patterns between these contemporary references and the linguistic markers are emphasised (Bonney 2011: 37), ‘A pronoun cluster, incinerated by dogs’ in the same context of ‘The wide avenues of Baghdad’ makes the innocent word ‘cluster’ bristle with implication, and pronouns fragile and sentient, even human. (Bonney 2011: 25) Like the adjectives figured as refugees, they seem vulnerable, especially the favoured ‘we’ of Bonney’s ‘I is another’. While the urgency of dates throughout the text suggests the contemporary, we are alerted to an implied relationship between references to time and ones to language on two occasions at least, as in ‘newsflash. May 2010. what we liked were / vowel one- ’ (Bonney 2011: 24)  or ‘December 2010. a high metallic wire. content exceeds phrase’. (Bonney 2011: 30) (The near-future is evoked in ‘early 2012’ (Bonney 2011: 14)  but ‘the simple prison diagram - /18th October 1977’ (Bonney 2011: 29) alerts us to the mysterious deaths of the Baader-Meinhof terrorist group in Stammheim prison on that date.) The presence of dates like of ‘March 18th 1871’ points to the historical dates of the Paris Commune and to Rimbaud’s important (dated) letters on poetics (to borrow Bonney’s title). ‘The alphabet was a system of blackmail,’ notes Bonney, seeing it as a coercive system of ordering and categorising (Bonney 2011: 13) but Rimbaud had long before declared that ‘A time of universal language will come! Only an academic – deader than a fossil – could compile a dictionary… Weaklings who begin to think about the first letter of the alphabet’ – Bonney’s ‘vowel one’ – would quickly go mad!’ (Rimbaud 2008: 117) Bonney similarly dismisses academic language about letter-sounds: ‘some crap about the immanence of vowels etc’ (‘etc’ often functions as an index of a thought Bonney cannot be bothered to bring to completed articulation). (Bonney 2011: 13) The desire for a new, direct revolutionary language is expressed by Bonney in the same metaphor: ‘So rent me a gap in the earth, a fissure in the alphabet,’ he writes, as though they were equivalent seismic ruptures of world and word. (Bonney 2011: 45)
Behind all this lies Rimbaud’s poem ‘Voyelles’, which is embedded, quoted or alluded to more extensively in Bonney’s poem than any other Rimbaud work. As such the poems are multiple but fragmentary translations of that poem into a contemporary mode.
In A Season in Hell which Bonney calls ‘it’s coming out of the pain of that collective subjectivity returning to an isolated, personal one’ (Bonney nd) Rimbaud refers to the poem, and says, ‘I invented colors for the vowels! … I made rules for the form and movement of every consonant, and I boasted of inventing, from rhythms from within me, a kind of poetry that all the senses, sooner or later, would recognize.’ (Rimbaud 2008: 232) Whether we are talking of personal synaesthesia or of Bonney’s ‘the social senses, the world turned upside down’ (Bonney nd), this poem is central to Rimbaud’s project. The poem begins:

A black, E white, I red, U green, O blue, vowels,
One day I’ll tell of your latent spawnings;
A: black velveteen corset of flies
blusters and clusters over the cruel stench,
The shadowy gulf.

In Bonney’s version it is not ‘I’, but ‘they’ (28) or ‘We’ who ‘invented colours for the vowels’ (38) the endangered pronouns interchangeable it seems. ‘We were nouns,’ he writes, but adds ‘a black gulf where your speech is rusting politically’, (39) translating  the excremental ‘Golfe d’ombre’ (what else would a band of flies hover over but shit?) as a place of no language (or silent complicity and guilt), using a colour that is also a process (rust is like objective synaesthesia). Bonney mobilises the schema of Rimbaud’s poem for his own purposes. Sometimes he is direct and the vowels list troubling details of a perceived political reality: ‘(a) the fusion of transnational capital with reactionary political power/ (b) arbitrary militarisation’ etc. (Bonney 2011: 47) At other times they are about utterance: ‘(a) negates the interruption of the speaking I - / (u) a system of collective thought’ though even here the language of the oppressor (dole office jargon) is heard  judging the oppressed: ‘((i) unable / unwilling to find work’). The categorizing alphabet is tellingly disordered in this repetition.
One particularly enigmatic section contains lists of both vowels and colours, though Bonney does not associate them, having reformed them in collagic action with other elements. Pronouns are emphasised throughout this work; it opens: ‘mostly they have explained your world’. Combined with the casual ‘mostly’, this isolated line is sinister; ‘you’ has little power. The next (isolated) line ‘they invented colours for the vowels’, reforms Rimbaud’s ‘I’ (who will be an other anyway) into the same mysterious collective. The vowels, unlike Rimbaud’s, are not spread across one metrical line as if in some equivalence, but arranged as a non-alphabetical list, the items fragmentary, repetitive.

Davidson could have been thinking of the use of ‘stones’ in four of these five lines, and of ‘simply’ three times, in this passage, when he comments: ‘The repetition in Bonney’s work, rather than providing stability, produces instability, as a reader tries to make connections that the poem wilfully refuses.’ (Davidson 2010: 33) ‘Give us stones, magnificent stones,’ another poem cries, where the context is more securely that of urban revolution, the stones the necessitous weapons of the crowd. (Bonney 2011: 49) The ‘public spheres’ and ‘hunger’ gesture towards a politics the lines cannot articulate; the vowels of this world are disordered. Bonney’s desire for a form that reflects his perceived political reality (perhaps a post-revolutionary moment after the 2010 protests and the dissipation of its energies, and like Rimbaud of the Season) seems realised here. Nonchalence and inconsequence battle with incoherence and fragmentation, though there is a Rimbaudian cry for paradise:

‘so anyway’, while we were picking berries
pretty as a kidnap / ‘our superiors’
o paradise. here is a small door.

‘Our superiors’ is a phrase that foregrounds the strangeness of the possessive pronoun. (Compare to ‘our baskets’; ‘we’ possess our own inferiority, a small door for ingress and egress). The colours, not associated with vowels, are arranged in almost reverse order to Rimbaud’s and renounce the imagistic precision of Bonney’s precursor, although the reference to ‘our arseholes’ (which may be equivalents to ‘our superiors’, signalled by parallel formation) is a quote from Rimbaud’s scatological ‘arsehole’ sonnet, and is the only complete sentence. (Rimbaud 2008: 150). The mainly abstract fragments are only conventionally associated with the colours.

(blue) ‘the ultimatum expands on’
(green) ‘we presume the decision not’
(red) ‘magnetic idiocies, mostly’
(white) ‘our arseholes are different’
(black) ‘isolation in its pure phase’

The items ‘ultimatum’ and ‘decision’ suggest the language of the administered world rather than Bonney’s ‘world turned upside down’, but his deregulation of the language (‘isolation in its pure phase’ maybe) offers images of the utopian (‘heaven’ against fragmented effacement (‘not there’):

anxiously their faces, were not there
it was a kind of heaven, scraps of sky

Language, capitalism, revolution and Rimbaud are entwined in another fragmented poem:

as if commodities could speak > or fired
lived bullets & teargas, as crackling words
encircled the last of the liberated cities
or the fierce buzzing of the flies (Bonney 2011: 33)

Commodity culture might confess in language but words, the liberating vowels of Rimbaud, are transformed into the flies of ‘Voyelles’. Live ammunition becomes lived experience in the transformations (and translations) of Bonney’s sequence.

Note at the End: F. Scott Fitzgerald translated this poem too, that Trimulchio of West Egg; it’s in George Steiner’s Poem into Poem. He knew that ‘vowels’ should rhyme with ‘bowels’ to indicate that the ‘cruel stench’ was shit. He also effects a thoroughly innovative change to the final line; where most writers follow Rimbaud and see the return of an apocalyptic god figure – ‘O … OMEGA … the violet light of his eyes’ –  he has the extraordinary  ‘O equals/ X-ray of her eyes; it equals sex’. It was only when I looked at the French line that I think I saw what he was up to: ‘O l’Omega, rayon violet de Ses Yeux’. I think, as though he were transforming the poem as a contemporary experimental poet might, he saw the word SEX (all things being equal) in ‘O l’Omega, rayon violet de SEs YeuX’. Se(s Yeu)x. Sex. After all, it’s a poem about letters. You'll have to wait for my version of 'Petrarch 3' (a derivative derive after Peter Hughes and Tim Atkins) which is also a version of 'Voyelles', if you can imagine such a thing.

Check out all related posts here.