Yesterday I pondered whether I should attempt a lightly-revised second edition of the (Salt as was) Companion to Lee Harwood. I was surprised that the book was published in 2007, so long ago, it seemed. I like the book very much and think that it is an important collection on the works of a writer then happily still alive. I regret it being out of print, but I'm not sure it needs republishing. Perhaps one of the (younger? one hopes?) scholars who contact me as Lee's literary executor for permissions will thrust forward with a monograph soon. I have plans to co-edit Lee's prose, but this has been shelved, for a while.

I was surprised by my decision, because I thought it would be a positive one. I might, however, try to obtain some more copies.

I know, of course, that today would have been Lee's 79th birthday.

I don't want to just refer to obituaries on the day of his birth (remember 'Birthday Boy' in Dream Quilt?). Let's have an early photo of him, 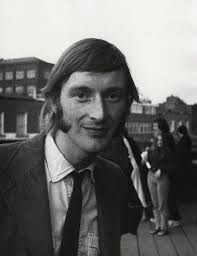 and let's point to some writing by others. OK. These are good pieces, John Yau as a member of the Lee Fan Club (I guess i must be the secretary of that august body!) HERE, and (from this side of the pond), Ian Davidson's review of the 2004 Collected here.

My review of Collected Poems in two parts here and here. On later works here; on recent works here. And an earlier gift to him here. A later 'Laugh' with Lee Harwood may be read here.

And news of the developing British Library Harwood Archive here.

Posted by Robert Sheppard at 8:39 am