The frog then leaping into
its own rippled splash.

Fool rules IKEA:
Car was Zuton bike on moon.
My zone yoyos too!


These poems come from a diary I kept between January and April 2018. The Basho variations (the first of which I wrote some years ago for teaching) appear in my untitled prose haibun which is now safely in a brown envelope in a drawer for a month. 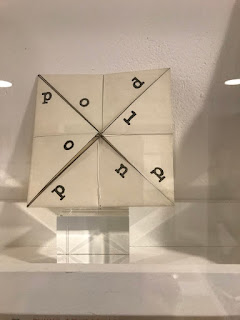 This is my favourite version of the poem: by dom silvester houedard (dsh), in three words: 'pond/frog/plop' folded in one of those children's games (I don't know what they are called, but if you've ever played one, you'll recognise this. If you don't, ask somebody older.)
Posted by Robert Sheppard at 8:00 am