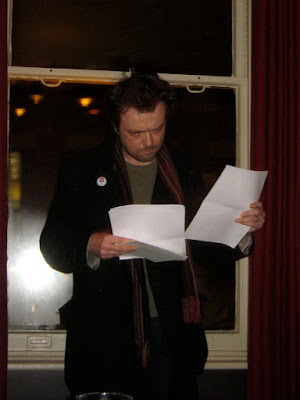 Sean Bonney died sometime over the last few days. I have seen, not announcements of his death, but reactions to such announcements, and an outpouring of grief from many in the poetry world. I brood darkly, in sorrow.

I was very fond of Sean, and I will miss his enervated, jumpy, jerky commentary, sly and incisive, whenever we’ve met, quite often over the years: at London gigs and Edinburgh launches and conferences, at a Liverpool Tate reading and at Birkbeck after-viva piss ups (both after his own and Frances Kruk’s, another favourite person).

When I moved to Liverpool in 1997 I was told (by Geoff Ward, at the New Hampshire conference) to look out for Sean. But he had swapped cities with me and was in London! Later, at the Writers Forum workshop, Bob Cobbing invited a ‘Sean’ to read, and somehow I knew this energetic young man was Bonney. A blur of meetings follows, and snippets of conversation: an early account of attending an SWP meeting and being horrified by the confessional atmosphere, for example. There is also the memory of the long interrogation of his excellent PhD on Amiri Baraka, for which I was honoured to serve as external, the room growing darker as he enthralled us with his revolutionary readings. And often, the oft-told tale of his dual and simultaneous discovery of the Poems for the Millennium anthology and Cobbing’s Writers Forum workshop, at which he developed a distinctive ‘London’ reading style, in the mode of Adrian Clarke or Ulli Freer.

It struck me the other month that what makes Sean’s political poetry ‘work’ (if that’s the right word) is that he felt politics viscerally, corporeally. He responded to ideas and their effects in the world as one would respond to a disease, dis-ease I suppose. I humbly hope the same for even my current Brexit poems, with their different tone. For Sean’s tone was ascerbic, hyperbolic, surreal. He wasn’t writing protest poetry in the vein of Diane DiPrima (another interest of his). He once told me about one of the poems which James Byrne and I selected for our transatlantic anthology Atlantic Drift – the narrator’s account of phenomenal drug-taking and attendant psychosis (more Burroughs than Brecht) was often read as literal, autobiographical. ‘Haven’t they heard of artifice?’ he pleaded! Which is not to say that he was not affected by drugs or panic: after the Atlantic Drift launch (a great reading and a pleasing sneezing fit during the Pro Vice Chancellor’s corporate speech), he screamed in the night and was phoned up by hotel reception. It was characteristic of Sean that he was both apologetic to the Pro Vice and fled the hotel without breakfast next morning; I found him at noon sitting opposite, leafing through one of his notebooks. I sat down with him: our last extended conversation (about life in Berlin, I think).

His dramatising of politics was often extreme: William Haig’s skull penetrated by a nail is exactly the kind of ‘image’ that many are trying to remove from public discourse after the murder of Jo Cox. But perhaps those poems belong to their 'revolutionary moment' (probably the student loan riots of 2011). The 'revolutionary moment' (this is Sean's term from  the PhD) may arise again.

Just after that period I began to write my book on form and a number of pieces were produced around and adjacent to The Meaning of Form. In 2012 I wrote a take on ‘Form, Forms and Forming’ for a conference in Edinburgh, at which Sean was a guest speaker. It was a post-graduate conference on form and I was desperate to attend (even though I was a Professor; the company (mostly fellow-poets as it turned out) was more congenial than was common at academic conferences). The piece appears on my blog here,

and something like it appears in the book as part of the final chapter, its conclusion. Sean’s work was not the focus of that piece, but it fed into a piece I wrote for or to Sean: ‘Bad Poetry for Bad People’. It appears in my Veer book Unfinish (see here

and (an earlier version) may be read on Intercapillary Space here

I hope people will see how this piece reflects on Sean’s work. Another piece of writing I did on Sean’s work, it strikes me now, must have been a reference in support of his Post-doc studies in Berlin. The success of which meant I saw him less. My main critical writing on Sean Bonney’s poetry is in The Meaning of Form, a book you may read about here

. I wrote on what (after the book appeared) people now call ‘expanded translation’ in the chapter Translation as Occupation: Simon Perril and Sean Bonney. What I loved about his Arthur Rimbaud book Happiness (and it strikes me now how it must have informed my own ‘translations’ – or transpositions as I now call them) was his politicised re-reading of Rimbaud’s two famous buzzword slogans. The central passage is:

Rimbaud wrote … ‘A Poet makes himself a visionary through a long, boundless, and systematized disorganization of all the senses’ Rimbaud 2008: 116), a page or so after announcing that ‘I is another.’ (Rimbaud 2008: 115) These are interpreted afresh by Bonney, within the context of Rimbaud’s particular revolutionary moment:

Rimbaud hammered out his poetic programme in May 1871, the week before the Paris Communards were slaughtered. He wanted to be there, he kept saying it. The ‘long systematic derangement of the senses’, the ‘I is an other’, he’s talking about the destruction of bourgeois subjectivity, yeh? That’s his claim for the poetic imagination, that’s his idea of what poetic labour is… The ‘systematic derangement of the senses’ is the social senses, ok, and the ‘I’ becomes an ‘other’ as in the transformation of the individual into the collective when it all kicks off. (Bonney 2012: 64)

‘Derangement’ is wilder than ‘disorganisation’ (and the alternative translation, ‘deregulation’, sounds too administered) but there is evidence for this interpretation in the ‘Letter’ (and the poem), as I have shown above. Bonney is keen is develop the othered ‘lyric I’ as ‘an interrupter,’ a political agitator, and a member of ‘a collective’ citizenry in accordance with this Marxist reading. (Bonney 2012: 65) Whether it is right or wrong as a reading of Rimbaud is not the issue here; what matters is how this is intimately related to Bonney’s poetics and to his choice of Rimbaud as his ‘occupied’.

I wrote The Meaning of Form by developing blogposts; the bare bones of the work (with diversions that were part camouflage and part guerrilla interventions into critical discourse) are contained in these two long posts: 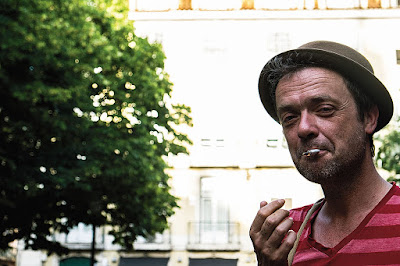 My most recent dedication to Sean was in one of the poems of ‘Surrey with the fringe on top’! In it, I begin by ironically suggesting that Sean’s identification of George Osborne with the God of Love in Happiness no longer applies. (‘Meet the new cunt same as the old cunt,’ we might say.) My God! Look who he was replaced by. I begin my version of the Earl of Surrey’s sonnet:

George Osborne isn’t the god of love anymore.
It’s Bo and when he’s not sitting on his hands
he’s sitting on my face so I can’t hear his latest gaffe.

Amid the irony I say: ‘We’re fuming. And hurting. And dying.’ We are now, Sean.
Posted by Robert Sheppard at 4:00 pm