My poetics piece ‘The Necessity of Poetics’ has been through a number of publication channels, including this blog, and a part of it (in some ways, the central part, the even slightly-famous, ‘definitions’) is now available on the new Creative Critical website, with a fresh introduction, as requested by the editor of this ‘blog’ part of the website, Robert Hampson. You may read these two conjoined discourses here:

‘The twenty first century’, they say, ‘has seen the erosion of any sharp distinction between the “creative” and the “critical”. Can criticism itself aspire to be creative? Does creative writing have a critical force? Or should we dispense with these terms altogether?

I’m quite happy to regard criticism as criticism (and with its inherent creative elements, as I know from writing it straight), creative writing as creative writing (which has critical elements and even a critical function, as I know and argue elsewhere), and see poetics as the third term between them, as I argued in, my inaugural lecture (which is on this blog, here: https://robertsheppard.blogspot.com/2017/03/robert-sheppard-inaugural-lecture-part.html ). Just to recap: I have (repeatedly) defined poetics as the ‘product of the process of reflection upon writings, and upon the act of writing, gathering from the past and from others, speculatively casting into the future’. It is a writerly discourse.

Just for the record: ‘The Necessity of Poetics’ first appeared as ‘The Poetics of Writing; The Writing of Poetics’, in Creative Writing Conference 1999, Proceedings, Sheffield Hallam University, 1999. A shorter version, emphasising practical uses for students, was published by Ship of Fools in 1999 solely for distribution amongst Writing Studies MA students at Edge Hill College of Higher Education (later University), Ormskirk, Lancashire, UK. Another – emphasising poetry – was published in Pores (2001). Updated versions were amended, expanded and abridged in various ways – a Ship of Fools booklet was published in 2002 and was re-printed a number of times until 2016 – but the chief addition is the section ‘Poetics as Discourse’ which was written in 2009. 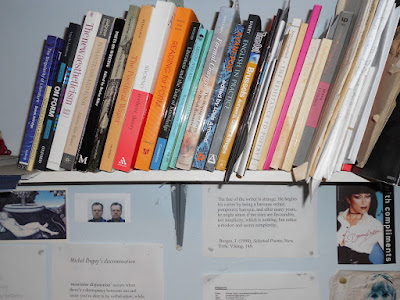