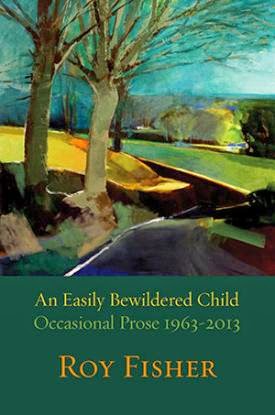 ‘I owe CM a debt of understanding,’ Roy Fisher has written recently of Christopher Middleton, in a short note reprinted in the new Shearsman An Easily Bewildered Child: Occasional Prose 1963-2013:


At a time when the Sunday broadsheets still carried reviews of new poetry there appeared a review of his book Torse #3. [sic] The piece was by its own standards civilised: but it was patronising, ignorant, insular and weary. I had at that time virtually no contacts and no prospect of getting a book published; but I was working tentatively in a distant corner of the same territory, and the review showed me in an instant how the cards were stacked. It freed me from setting any store by opinions that might come from such a quarter. (Fisher 2014: 196)


This exemplary declaration of independence (torse 3 was published in 1962) set Fisher up for a career that is definitely and quietly defiant, yet modernist in orientation, with a perceptual poetics that torques the social perspective into the phenomenological. It turns the general philistinism of British cultural life to its own advantage through its awareness that allegiances to influences outside of the Movement Orthodoxy will find precious little support from mainstream culture so one might as well get on with it. Which Fisher did. And which is another story told elsewhere (and traced by Fisher himself throughout the pages of An Easily Bewildered Child).


I thought of this statement after listening to a poet published by a large independent press bemoaning the sales of his or her recent book. (I’m disguising identity.) It had just comfortably exceeded the hundred mark. I later remarked to a mutual friend that the problem was this poet believed in the world of the published book, whereas poetry publishing, not just small press poetry publishing, is largely a gift-economy. I strained for the words of Fisher above, but couldn’t quite reprise the tone of relief in its release from the world and words of mainstream (and metropolitan) opinion. (I also recalled a story I’d heard of agents from Faber being alarmed, when on sharing a discussion panel with the other Fisher, Allen Fisher, they heard him announce that he sold 500 copies of Brixton Fractals, when they could only shift a hundred copies of an unknown writer. They would have thought of Fisher as unknown, the unofficial channels by which he distributed his work, illegitimate. But which world is disseminating more poetry? That’s even before we examine aesthetics and poetics, and the poetry itself.)


The review Roy Fisher read, I am guessing, is the one by A. Alvarez, who, as editor of the Penguin The New Poetry, was both detractor of and perpetuator of mainstream orthodoxy, detecting the germ of a poetry of psychological extremism lurking in the Larkinesque – and getting his payoff from the final works and tragic days of his Hampstead neighbour, Sylvia Plath. Middleton’s reported reaction to the ‘patronising, ignorant, insular and weary’ review was to emigrate, finally to the where he has lived ever since. I am sure his removal from was more complex than that but the comparison with Fisher’s retreat to a Bely-esque city of modernism in , a scratch philosophy concocted out of perceptual scraps, is instructive. Perhaps Middleton should have believed a little less in the world of the published book, and sought a similar freedom in loss.

Fisher, Roy. Untitled Note in ‘Tributes to CM’, http://www.bowwowshop.org.uk/page10.htm (accessed 5th October 2014). Fisher is only one of a number of fine tributes.

See also my own take on Christopher Middleton, published in The Wolf, which kicks off with the same Fisher 'note', here. (There is more on Middleton on this blog here and here and here.)
Posted by Robert Sheppard at 10:15 am