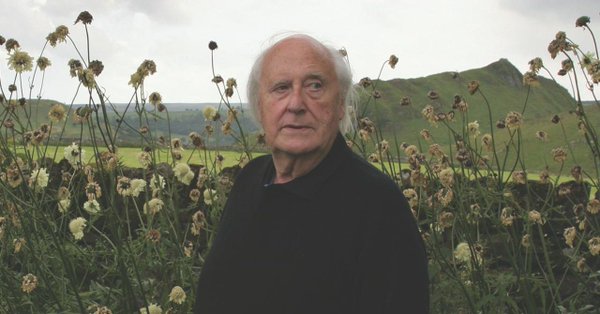 Between buildings brushed
By bitter wind

As some else
Thing resonates


A minor chord
Among flurries tinkling

Lost in
Tingles of thing


Hoist from the purest
Lyric a catch


To pull up the stepped lines
Silvered in living daylights


Into its own grey withdrawal
Terrified of its black heart


Throws long shadows lawns of
Dark stretching back from flaming


Glint buckled fire for a
Second then gutter

Lost reclaimed
By the order of place some


Where at the periphery stretches
A god created by gospels


Note: I am at the moment writing a new poem for Roy, not quite in memoriam, because I wrote it on the train to work in a state where I didn't know whether to believe the single tweet I'd read about his death,, which seemed to appear and then disappear before I left. But the appearance of one of the Roy Fisher doubles who populate Britain (cousins all of the 'actor' who plays the narrator in The Ship's Orchestra) on the bus seemed to be a representative of the neither living nor dead. That's what the poem is about, a veritable Roy Fisher theme in a Roy Fisher wrapping, I hope. I hope it also sees the light of day. By the time I got to work, tweets from authoritative sources acknowedged his passing. And then, later in the day, word of David Kennedy's death. Then later: the London attack. For today, the poem is on the drawing board, as is another Wyatt/Petrarch poem, written this morning, one which glancingly mentions the terrible (but foiled) attack on Westminster Bridge. 14.19

Posted by Robert Sheppard at 2:19 pm