I am pleased to say that I have a very strange (short) sound poem in NOON: An Anthology of Short Poems, edited by Philip Rowland, which presents a carefully arranged and strikingly diverse selection of poems from the issues of NOON: journal of the short poem that appeared in Japan between 2004 and 2017.

Focusing on poems of less than fourteen lines, Philip Rowland has assembled a richly suggestive, renga-like chain of over two hundred poems by almost half as many poets, at the same time showcasing, he says, 'some of the most interesting minimalist poetry being written in English today'. Nice cover! 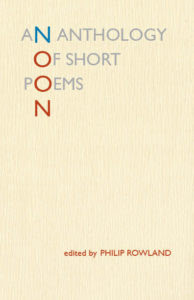 My contribution is one of my ‘twittersonnets’, ‘hammerhead’, and it's one of three published in Issue 12 of Noon,, ‘hammerhead’, ‘lucretius’ and ‘micrographia’. They were written for the ‘Life is Short’ day at Bluecoat, Liverpool in November 2015. (See here). I write about them here:

https://robertsheppard.blogspot.com/2016/10/robert-sheppard-3-twittersonnets.html
The original twittersonnet (and other twitterodes) may be found in the works of René Van Valckenborch in my A Translated Man (Shearsman, 2013) and the second in my Petrarch 3 (Crater Press, 2016). The (then) constraint of 140 characters was distributed across the 14 (8+6) line frame of the sonnet, 10 characters or spaces per line. You can see the original here:

More publishing news. All of my new ‘Twittersonnets’, including the one in NOON: An Anthology of Short Poems, will be published shortly in my small, limited edition of short poems, Micro Event Space coming from Red Ceilings Press.(Notice that word 'shortly'.)

The book is published by Isobar Press. https://isobarpress.com/