On Literary Collaboration part 14: some final thoughts and LINKS to all previous parts (hub post)

This probably concludes my ‘Thoughts on Collaboration’. I think it is best that my remaining work on the theme is composed offline, for eventual publication as a critical article.

Only one final text to acknowledge, the extraordinary 500 page Poetic Interviews, edited and conducted by Aaron Kent, from Broken Sleep Books, 2019, in which Kent uses poems much as an interviewer uses questions - and various writers (I note SJ Fowler amongst them) reply with poems. The project is so massive (and with so many of the poets unknown to me) that I don't feel able to comment on it. It probably deserves a footnote in my article, an example of a multiple to- and fro- ing structure.

On a personal note, I am pleased to report that there are plans for Veer to republish both my collaborations with Bob Cobbing (which I talk about  here ). That’s a good way to end this rambling strand.
I have read this strand through and I’m surprised that I spend so much time looking at my own collaborative work, although I am always interested in new collaborations, and I have obviously been thinking about fictional collaboration as a way to forward the ‘Fictional Poets’ project (as I have found myself calling it), but, again, its final form is probably better developed off-line. The more important parts are those on Corcoran and Halsey and SJ Fowler in general and in collaboration with Chamberlain and Nelson. You can pick out which bits are of use to here, through these hub post links. And the most coherent parts are the two reviews, one of the Halsey-Corcoran collaboration  HERE , and one of the SJ Fowler book HERE, both of them appearing off-blog, if I may invent yet another term. Here is an example of another such term, the 'hub post' to this strand:

The introductory part one, flags up the themes and surveys the territory, here:
https://robertsheppard.blogspot.com/2020/01/robert-sheppard-thughts-on.html

In part two, I talk about ways I've collaborated across media here:
https://robertsheppard.blogspot.com/2020/01/robert-sheppard-thoughts-on.html


Part three, is here. I talk more about literary collaboration, but I also try to account for my own transformative practices (in 'The English Strain' project) that are not collaborations, not translations, but are transpositions.

Part four, on some of my literary collaborations, is here.

Part five is about SJ Fowler's 'Enemies' collaborative project, in general, and my part in them (with videos). It may be accessed here.

(Here is an example of a collaboration between Tom Jenks and SJ Fowler. It is an hilariously funny guide to life after Brexit using the images from the 1980s 'Protect and Survive' booklet. It's less part of my 'Thoughts on Collaboration', and more of an interlude. I witnessed this performance.)

Part six is a round up of my own literary collaborations in Twitters for a Lark; poetry of the European Union of Imaginary Authors (the EUOIA) here.

Part seven considers some of the ways female coauthors have operated and whether the term 'coauthors' isn't a better term to use to describe what's going on here. Here.

Part eight consists of two parts: my considerations of the past collaborations of Kelvin Corcoran and Alan Halsey here. The second part is the linked review of their co-authored Winterreisen on Alan Baker’s excellent online journal Litter HERE (if you want to go straight to it).


There are also links there to the review I have written of Fowler’s book.  That may be read on Stride  HERE.

Part 10 is an account of Fowler’s poetics of collaboration. Here:

https://robertsheppard.blogspot.com/2020/04/robert-sheppard-thoughts-on_3.html
Part 11 is an account of Fowler's collaboration with Camilla Nelson (as it reads on the page), here.
Part 12 continues to analyse Fowler's collaboration with Nelson, but it takes account of the extraordinary dynamics of its 'Enemies' performance (which was filmed), here.

Part 13 reviews most of Juha Virtanen, Poetry and Performance During the British Poetry Revival 1960-1980: Event and Effect. Here.

Part 14 (that's this post!) contains links to all parts and off-shoots of this collaboration strand, in preparation for the writing of an article on that subject. 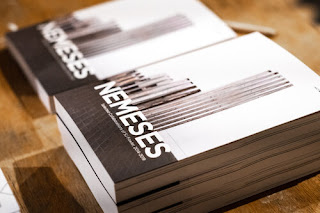 S.J. Fowler has some thoughts about the whole of this strand, here: http://www.stevenjfowler.com/blog/sheppardoncollaboration
Posted by Robert Sheppard at 8:00 am