I’m delighted to announce that Bad Idea is available NOW from Alec Newman’s excellent press Knives Forks and Spoons, with a cover design by Patricia Farrell. You may get it HERE:  https://www.knivesforksandspoonspress.co.uk/product-page/bad-idea-by-robert-sheppard-102-pages 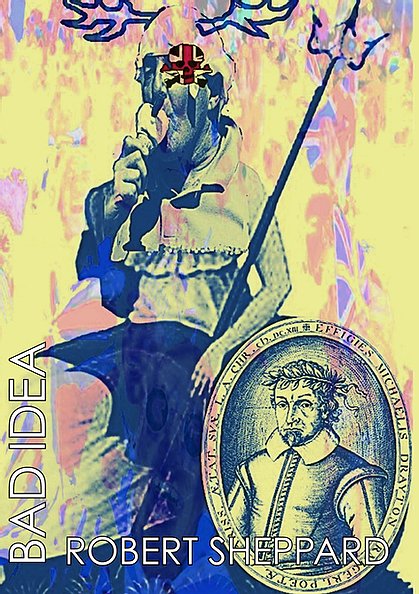 Let me say a little about this book. There are two ways of seeing it. One: it is a homage to Michael Drayton’s 1619 sonnet sequence, Idea, transpositions into contemporary forms. Two: it tells the story of Brexit, as it passes through the body politic, the undigested cake and eat it of daily life. We read of the peccadillos and pet projects of the Brexiteers, the ineptitude of resistance. Expect comedy and chaos rather than analysis, ‘how not to get the blues while singing the blues’. You don’t need to know any more about Drayton than I’m telling you here to ‘get’ these poems. Drayton is both Renaissance man and man of resentment. His worshipped muse Idea is transformed into a tragic Scouse idealist caught in a satire nobody can quite control. ‘The English Strain’ of the sonnet tradition meets the dogging sites of post-Brexit Britain. You’ve got to laugh. You couldn’t make it up (though I did).

You will notice that I call the poems ‘transpositions’. The term ‘expanded translation’ has been popular in some quarters, but I prefer my term to emphasise the process of transformation as I version my way through the English sonnet tradition. Bad Idea is a transposition of Idea for our times.

There are posts on my blog written during the writing of Bad Idea that may be accessed, with links to some of the poems, here .

A cluster of sonnets may also be read on the Knives Forks and Spoons Press site. (There are other books of mine at KFS too, my book of short stories, The Only Life, and my autobiography Words Out of Time.)

Here’s a post with a video of me reading one of the poems, celebrating the day my copies arrived: Pages: A Well-Deserved Break/Bad Idea available/Brexit Christmas Past (robertsheppard.blogspot.com)


And here's a quick video of me reading the 'Address to the Reader', a version of Drayton's Sonnet 28.

Bad Idea is Book Two of a longer project, ‘The English Strain’, though it may be read on its own.

Check out Book One, The English Strain here and posts on Book Three, still in progress, probably to be called British Standards, may be caught in action here: Pages: Weird Syrup: The final Keats variation: a (premature) farewell to satire as a strand in British Standards (temporary post with video) (robertsheppard.blogspot.com)

In short, the parts of ‘The English Strain’ are: