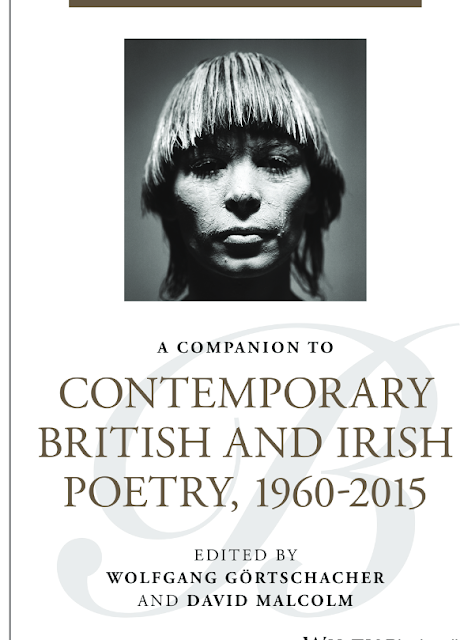 I have a couple of essays in this massive compendium of British and Irish poetry, which has arrived today. It has taken some years for the two editors to put it together, and while I obviously haven’t read it (though I know Scott Thurston’s piece on ‘Linguistically Innovative Poetry’), just turning the pages over, I can tell this is a splendid book. Having written for both of the editors before, I vouch for their editorial thoroughness. Of course, it’s pricy, but it’s huge; ask your library to get it.

It is a comprehensive and scholarly review of contemporary British and Irish Poetry with contributions from noted scholars in the field. A Companion to Contemporary British and Irish Poetry, 1960-2015 offers a collection of writings from a diverse group of experts. They explore the richness of the work of individual poets, genres, forms, techniques, traditions, concerns, and institutions that comprise these two distinct but interrelated national poetries. The best I can do at this early stage to ‘review’ it – it has literally arrived in the last hour – is to list its contents at the end of this post. I plan to read it all, in order. What I can say is that I’m pleased there is acknowledgment of the alternative poetries alongside the mainstream offerings. I know library copies of such books demonstrate the prevalent use, through wear and tear, of pages relating to canonical figures, but the rest is obdurately present. The limit of 2015 is judicious, I think, since these books take a long while to assemble. And quite a lot has happened since 2015 which cannot be its concern.

The editors are Wolfgang Görtschacher, PhD, Senior Assistant Professor at the University of Salzburg, where he has taught literary criticism and translation studies since the early 1990s. He has published widely on British poetry magazines, contemporary British and Irish literature, and translation studies. And David Malcolm, a professor of English at SWPS University of Social Sciences and Humanities in Warsaw. He previously taught for twenty-eight years at the University of Gdańsk and has published extensively on British and Irish fiction and poetry. Both have appeared at Edge Hill for conferences or papers. I write about the book in a flash review here: Pages: A Rapid Response to A Companion to Contemporary British and Irish Poetry ed. Gortschacher and Malcolm (robertsheppard.blogspot.com)

In their introduction, the editors discuss a number of poems, and I’m pleased (and surprised) to announce that my own sequence ‘Fucking Time: Six Songs for the Earl of Rochester’ is discussed there. They signal that the poem appears in my Tin Pan Arcadia which is the only 21st century volume of mine out of print: it appears in the still-available Complete Twentieth Century Blues (see here: Complete Twentieth Century Blues, Robert Sheppard - Salt (saltpublishing.com) and re-appears in History or Sleep, my selected poems (see here: Shearsman Books buy Robert Sheppard - History or Sleep - Selected Poems 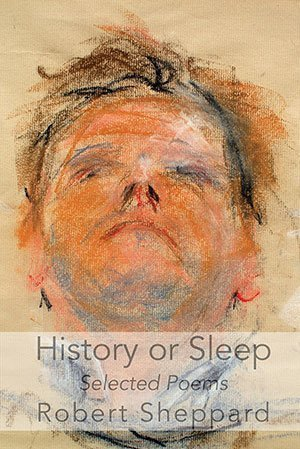 A part of the introduction aligns itself with formalist readings of poetry, and quotes Derek Attridge, as do I in my The Meaning of Form. See here: Pages: Robert Sheppard: The Meaning of Form in Contemporary Innovative Poetry PUBLISHED

I have two essays in A Companion to Contemporary British and Irish Poetry, 1960-2015 . As you can see from the list of contents, first I write about ‘The British Poetry Revival’, a subject I have revisited on this blog as well:

There’s also much about the Brsitish Poetry Revival in a later take than the piece in this book, part of a partial review of Juha Virtanen's excellent book on performance in poetry, Pages: Thoughts on Collaboration 13 or: review of Juha Virtanen, Poetry and Performance During the British Poetry Revival 1960-1980: Event and Effect. (robertsheppard.blogspot.com). (He also has a piece in the book, which I am looking forward to reading.) Here's Better Books: 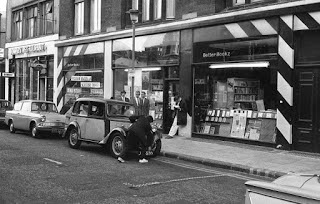 Secondly, I present here what I thought of as my definitive piece on the work of Lee Harwood, when I wrote it. 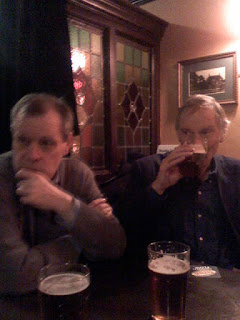 Lee and me in Ormskirk, after a reading

Details of this new book, published by WileyHumanities www.wiley.com ,  may be found here:

1. Some Institutions of the British and Irish (Sub)Fields of Poetry: Little Magazines, Publishers, Prizes, and Poetry in Translation

1. Manifestos and Poetics/Poets on Writing

2. The Genres of Contemporary British and Irish Poetry

9. The Long Poem after Pound

6. Martians: Towards a Poetics of Wonder

9. Performances of Technology as Compositional Practice in British and Irish Contemporary Poetry

13. Women Poets in the British Isles

d. The Past and Other Countries

3. 7 “Now Put It Together”: Lee Harwood and the Gentle Art of Collage - Robert Sheppard

3.8 Listening to Words and Silence: The Poetry of Elizabeth Jennings - Jean Ward

3.14 “Everything except justice is an impertinence”: The Poetry of Peter Riley - Peter Hughes

Posted by Robert Sheppard at 11:33 am