A Rapid Response to A Companion to Contemporary British and Irish Poetry ed. Gortschacher and Malcolm

My chapters ‘The British Poetry Revival’ and ‘Lee Harwood’ appear in the massive Contemporary British and Irish Poetry. You may read about it here: Pages: My two pieces (British Poetry Revival & Harwood) & editorial exhibit in CONTEMPORARY BRITISH AND IRISH POETRY, 1960 – 2015 Edited by Görtschacher and Malcolm (robertsheppard.blogspot.com). At that point, the point I announced publication, I’d not read the volume, of course, though I had noted that my poem ‘Fucking Time’ was subjected to a formalist reading in the Introduction, to which I am grateful. And I present some links to prefatory thinking on both of my pieces. 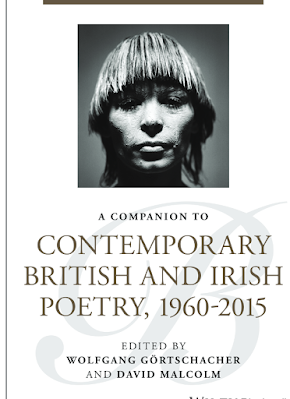 The formalist turn appears at particular points, especially in the essays written by the editors (again, this post needs reading against the earlier one to check the full list of contents which I include there). Now I’ve read the whole thing, I am allowing myself an hour to respond.

I’m not going to criticise areas not covered, poets omitted, etc… because it is a marvel that so much is included – and I found myself enjoying (or being instructed through delight) essays on subjects that I hadn’t thought I would like.

The book moves from the general to the specific (and from my not so well-remembered earlier chapters to the final article I finished reading half an hour ago!) So we begin looking at some of the institutions of poetry: how could Wolfgang NOT look at the little magazine, still important, in the age of online platforms? Prize culture is dissected, so that the way I recently answered one of Wolfgang’s students on the subject now seems a little naïve! I said: ‘Such prizes are machines for the production of taste. Last year’s winners often become next year’s judges. That seems perfectly benign to the organisers: winners will be capable of picking winners like themselves. You can see the innate conservatism in the mechanics. Nobody is misbehaving; it’s not fraudulent. It’s faulty, but it always produces a result.’

The late and very much missed David Kennedy’s piece on anthologies links with another piece, by Robert Hampson, on ‘generations’, and their anthologies – and indeed, Robert dissects the notion of a generation as a nice little temporal pond for little fish to feel big in (not his language of course). Robert prefers anthologies that cross generations (and I’m glad, of course, that he cites Atlantic Drift which I edited with James Byrne. (See here: Pages: Robert Sheppard and James Byrne (eds): ATLANTIC DRIFT published NOW (with links to reviews, events, etc.))

It is pleasing to see that my subject The British Poetry Revival and Scott Thurston's subject Linguistically Innovative Poetry (I think we both acquit ourselves honorably) are flagged up in the introductory paragraph, along with other shorthands of the era – and that this comprehensive ‘Companion’ will indeed be comprehensive. However, we still find essays on the American reception of British Poetry that focus on Heaney and don't even mention Raworth, for example, or one on the 'long poem after Pound' that doesn’t even checklist Allen Fisher!

Of course, that happens, with generalities. And we are only experts on that about which we are experts. But on the whole, if an essay is on Concrete Poetry or The Martian School (again, for example), it does not have to deal with its other (whatever that might be). I enjoyed quite a lot that wasn’t in my ‘area’. A good account of Liverpool poetry, or on Ulster poets. I enjoyed the Black Poetry essay (only one?) and it sent me off after Bernardine Evaristo’s verse-novel (yes, verse-novel) The Emperor’s Babe which is an exciting read. (Set in Roman Britain, it fed into some of my other reading, on that era, in one of the books I received as payment for my essay writing!).

One of the less congenial formalist investigations was indeed into ‘verse’. (No time now, but my Pulse – still unpublished – conveys my take on that. See here: Pages: Robert Sheppard: 'PULSE: All a Rhythm' published in Tentacular 5 (with links) While we’re at it, my ‘take’ on form, which is not identical to the stylistics firework displays we find here, may be perused in some detail: Pages: Robert Sheppard: The Meaning of Form in Contemporary Innovative Poetry PUBLISHED .

I did enjoy David Malcolm’s essay on the Movement – or to be precise, on New Lines, which emphasises what is often ignored by detractors: that the poetry therein breaks all the so-called Movement poetry rules (‘No poetry about foreign cities…’ etc). My pre-emptive defence is that I’ve always talked about the Movement Orthodoxy to indicate that the dead hand on British Poetry (still there or gone, do we think?) is a kind of ideology operating separately from individuals and even examples. It reminded me of one of my posited project from long ago, which was to re-write New Lines (I’d call it Different Line, a Larkin quote) as the anthology it should have been. Volume Three of the Fictional Poets project. I wonder, as the idea revives. It would be heard narrated by a Debenham’s dummy found by a Berlin poet in 2021; this plot-summary shows how byzantine this option would be. Don’t be surprised if you never have to read it! Back to the book.

I should have loved John Sparrow’s piece on cris cheek, Bob Cobbing and Maggie O’Sullivan, and I did, although I found the language of art-making used grated against my sense of poetic artifice (I think – I don’t have time to check it again now). An essay generous with visual examples.

I would never have thought of including chapters on Religious Poetry, or Anglo-Jewish Poetry, or Brit Poets in Exile – but I found them fascinating.

Some pieces I admired as a writer of critical prose. ‘Radical Landscape Poetry in Scotland’ by Alan Riach was a tightly-written piece, and it was good to again come across these lines of Norman MacCaig that I heard Jackie Kay quoting the other night on BBC Scotland:

Who possesses this landscape? –

The man who bought it or

I who am possessed by it?

Interest aroused by this chapter, it was a pleasure subsequently to read Monika Kocot’s piece on the old Makar, Edwin Morgan. (Indeed, this alerted me to another book that I’ve just bought, though I’ve yet to read it, McGonigal’s A Life of Edwin Morgan.)

I’m sort of flicking through the book as I go, doubtless missing gems (there’s 628 pages of glittering), and I’ve moved on to the last section that looks the oddest in a ‘companion’ that is generally general: essays on individual writers. Selected from a longer list (I remember, pleased to find Lee Harwood on it, for me to offer my services), these include excellent pieces, like the superb, concise, tightly-packed piece on Bill Griffiths by Ian Davidson. Batchelor on Barry MacSweeney is very fine. But I equally enjoyed Will May on FT Prince (that sent me back to the work). Peter Hughes’ piece on Peter Riley was a marvel (NO quotations from critics). But the piece on Kathleen Raine (how un-fashionable can you get?) was illuminating, although it did not change my negative readings of the work. I learnt a lot from the piece on Anne Stevenson – and should read more of her, even her Plath biography. She was a great friend of Lee Harwood, and I enjoyed her company at the Arvon Foundation (the only time I was asked to work there.)

In conclusion, though this is no review, this is a ‘scholarly and comprehensive study’ of its subject. I suspect it will be used as a reference book. A shame, because it does repay close attention page by page. I feel I want to read it all again. I’ll resist. It can go on the shelf where my publications are invading, volume by volume, others’ books’ spaces already there. I’ll have to shift two or three paperbacks to get this one in!

(I spilled this out with seven minutes to go in my allotted hour. It has been useful to cut through a lockdown lethargy that has descended upon me, oddly, after a year.)