My copy of Tears in the Fence 73 has arrived.

Copies are now available at https://tearsinthefence.com/pay-it-forward . I have a couple of related poems published here. Thanks to David Caddy for selecting and thereby juxtaposing them for this outing.

They are both from (different parts) of British Standards, the third book of ‘The English Strain project. One is my re-writing of Shelley’s canonical ‘Ozymandias’. You may read about my lengthy encounters with this text here: Pages: My occasional transposition of Shelley' s 'Ozymandias' appears and disappears (hub post) (robertsheppard.blogspot.com). Such encounters pre-date our contemporary engagements with public statuary and their unsavoury pasts, but my transposition of one of Southey’s poems about slavery brings us closer to home, not to Southey’s slavery-rich Bristol, but to contemporary (or lockdown one) Liverpool. Just so you know, Bold was a slaver, as was Tarleton. One Tarleton family member appears in ‘Tabitha and Thunderer’: see here Pages: My Transpositions of Mary Robinson's sonnets 'Tabitha and Thunderer' are now complete (hub post) (robertsheppard.blogspot.com) though this poem comes from the stylistically various set ’14 Standards’, which I write about here: Pages: Robert Sheppard: 14 Standards from British Strandards is complete as one sonnet appears at the virtual WOW Festival 2020 (hub post).

You can connect to all the news about the project as a whole, here: Pages: My THE ENGLISH STRAIN is published today by Shearsman (robertsheppard.blogspot.com) 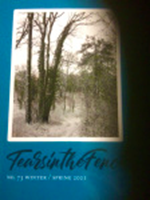 Tears in the Fence | an independent, international literary magazine

I've appeared in Tears in the Fence a lot over the last 25 (?) years, and here are some of my other appearances and/or responses to the issues:

Pages: Robert Sheppard: 'Between' a poem for Roy Fisher published in Tears in the Fence

Pages: Robert Sheppard and Anamaria Crowe Serrano (Jaroslav Bialy and update on my EUOIA collaborative project) Tears in the Fence

Pages: Robert Sheppard sonnets from Bad Idea published in Tears in the Fence 70

Pages: Robet Sheppard: 3 poems to the memory of Lee Harwood in Tears in the Fence (robertsheppard.blogspot.com)

Posted by Robert Sheppard at 7:30 am