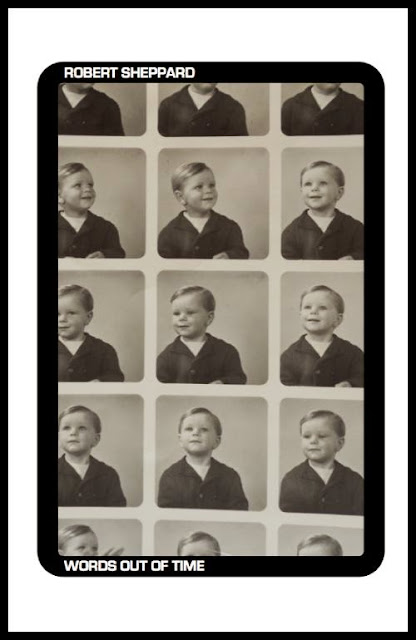 Words Out of Time deforms and reforms a 'story' of my life as an othering, an ‘autrebiography’, in modes that include what I call ‘unwriting’, in this case working through and transforming diaries and journals. The Given tells it in four different ways, from a litany of what hasn’t been remembered (a reversal of Joe Brainard's 'I Remember'!) to an alphabetical disfigurement of its features. Arrival invents a demonic sibling, generated from the diaries, restlessly inhabiting lyrics, a short story, an essay and footnotes. Audiences have found it spooky; I do too. In When I go coolly conceptual with ‘With’, while ‘Words’ weaves abandoned (found) texts to shake up this history (another 'unwriting'); ‘Work’ distends temporality, reverses standard autobiography’s fascination with origins, slows down time to show how work works its way into a life. I'm pleased with the trext and I'm very pleased with the job Alec Newman has done on the book (particularly the way he uses the cover images as section headings inside).

This is what they said of part one The Given, when it was separately published by KFS (now o/p):

On one level this is one of the most accessible and readable works Sheppard has produced; it’s also one of the strangest in its quiet subversions and playfulness, its self-questioning and self-awareness.

I should have read your book already and I liked everything about it.  There you are characteristically free of flash or reserve and it increases the sum of what can be written about I think.  And it’s funny.

In this intricate work, the poet asks: ‘Why does experimental writing demand experimental reading?’ The answer lies partly in the way in which, by bearing witness to another’s reorganisation of self, one might also find oneself reorganised in new and surprising ways.

This is a compressed autobiography, but unlike most autobiographies, it doesn’t hide the fact that the life-story it tells is invented by the very language used to tell the story…This is an impressive piece of work, but it’s only one small piece of the output of this prolific and inventive writer, who is always looking for new ways to extend poetic expression, and whom most contemporary poets could learn something from.
Alan Baker

Read a sample (from Arrival) and buy online: £10 here.

And read another sample, from When here.Click for pdf.

There are even some outtakes here, stretches of 'When' that didn't make the final edit, here.

Here's a later review of it here.

Also edited from the book was this diagram of the dates that are referred to in this work, the plot rather than the story, as the Russian Formalists would have said. I love the span and the occasional specificity. The earliest date is a bit of a surprise. The October 1977 date is a bit of a tease, a grim red herring (work it out!)

https://www.knivesforksandspoonspress.co.uk/product-page/words-out-of-time-by-robert-sheppard-108-pages
Posted by Robert Sheppard at 10:57 am