A celebration of the life and writing of DINESH ALLIRAJAH

A MANNER OF SPEAKING:

Wednesday 6th May: 7.00pm at the Bluecoat, Liverpool 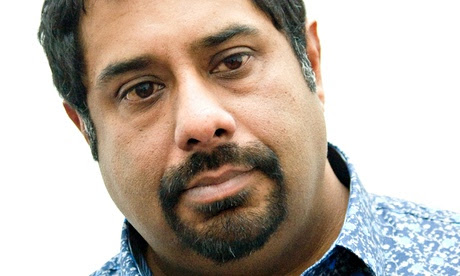 Dinesh Allirajah passed away in December 2014 aged 47.  On May 6th (Dinesh’s birthday), the idea was (Vic's idea!) for writers, publishers and academics, Levi Tafari, Eleanor Rees, Ra Page, Bryan Biggs, Catherine Frances, Dave Ward, Adrian Challis and (deeply honoured) myself, to present an evening to celebrate Dinesh’s writing achievements.  There was be a selection of recorded music reflecting Dinesh’s eclectic taste and the event was presented by George McKane of Yellow House. It happened (splendidly).

Dinesh’s stories and poetry were published by Spike, Comma and Peepal Tree.  He toured widely to perform in France, Poland, Germany, Bangladesh and Nigeria. He also taught at Liverpool John Moores University, University of Central Lancashire and Edge Hill University.
He was Writer in Residence at Liverpool Hope University and also worked extensively with Writing on the Wall and The Windows Project.
Dinesh was a believer in the liberating and educative power of the arts.  He was chair of the National Association for Literature Development and Catalyst Dance and Drama; a founding board member of Literature Northwest, chair of the trustees of the National Black Arts Alliance and a director of Comma publishers.

This was a great evening (I'm just back from it) and I said this as my humble contribution among many others (listed above):

I met Dinesh through my job at Edge Hill University where he worked as what is called an Associate Tutor, an ennobling term, possibly a euphemism, for an hourly paid part time worker, of Creative Writing. Of course, I knew who he was, as a writer and performer, and I was glad to meet him at last, but most of our exchanges were corridor-moans, huddled rituals of the profession, rather than shop-talk about our writing, though we probably conducted the equally ritualistic dialogue about not finding enough time to write with all the tiring teaching and marking, the tiresome admin. In any case, the best people to talk about his role as a teacher are of course the students, and I’d like to briefly quote one of them, Phillip Carter, now finishing his second year:

As I’ve probably told you before, [he wrote me] the poetry society would not exist had Dinesh not convinced me I was a salvageable poet. I think I only missed one class and always stayed behind to chat about work with him. He pointed out to me that I was a poet (not just a sci-fi writer who wrote poems twice a day) and gave me the confidence to start the poetry society.

Philip can’t be here tonight because he is performing at a poetry event somewhere out of town, which at one level is a shame; at another, it’s testimony to everything Philip says about Dinesh!

Dinesh was a public figure, a non-specific role that could have ‘unintended consequences’. We held a party once and invited Dinesh and Vic. Our son, Stephen, who at the time was volunteering at the Museum of Liverpool Life (where there was, or is, a handsome display of The Writers of Liverpool, complete with almost life-sized photographs) walked up to Dinesh while I was chatting to him, and announced boldly, in recognition: ‘You’re in our museum!’ Dinesh looked mildly startled, stared first at Stephen, then at me, realised what Stephen had just said – and the comic implications of it – and burst into laughter. We all did.

Come the aftermath of the Capital of Culture year, who better to ask to join a group of important artists and public figures – David Jacques, Lizzie Nunnery, Mandy Vere or [pause] Joe Anderson – to comment on the future of radicalism in Liverpool for a wonderful book, Liverpool: City of Radicals, edited by John Belchem and Bryan Biggs in 2011?

Dinesh’s contribution was pretty forthright, and struck me as remarkable for its refusal, his refusal, to become an exhibit in a self-regarding Mirrored Hall of an Imaginary Museum of Liverpool Culture, uttering complacent platitudes about his adopted city, providing cultural capital for the Capital of Culture legacy by pushing a button marked ‘radical’ to crank-up an automatic response. Absolutely not!

It is this short, mordant, regretful and poignant piece, rather than his poetry (such as the long work written in praise of the blind Liverpool poet Edward Rushton, who he also mentions in this piece), or from his accumulating short stories of café life, or even from his, by turns, entertaining and acerbic blog, that I have decided to read in his – I trust – lasting memory.

Warning: this piece, like Archie Shepp’s saxophone, shoots bullets! (There had to be a jazz reference somewhere in here!)

Read it! but before you do see this.
Posted by Robert Sheppard at 12:27 am