This academic year, I taught Motherboard  by Juliet Troy, a new Knives Forks and Spoons book I’d liked since before publication (I’d been asked to write a blurb for it but I was pushed for time) as the so-called 'Reading as a Writer' text to my ‘Poetry and Landscape’ poetry writing group. Following last year's practice (when I asked Alan Baker to submit to email interrogation about his book, Whether, see here) I asked Juliet if she would answer questions supplied by the class as a whole. Her generous responses to questions are reproduced below. Details of the book here. 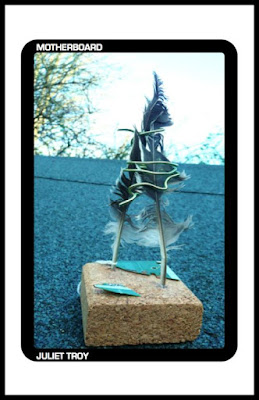 4.  We noticed a lot of names of species, for example, lists sometimes of animals and plants we don’t know and of scientific terms which are not familiar. Is the purpose of that to suggest how little we do understand about the ecosystem?

It was not really my aim to suggest how little we know about the ecosystem but rather to  incorporate a linguistic diversity in the landscape of the poem. Not only by including the names of different species but also to include a diversity using words from different languages and disciplines, again, as a kind of escape from the confines of the monolingual strictures imposed by globalisation that result in loss of species and language. In practicality this meant that on occasions when writing, I would prefer the sound of words translated from other languages  to their equivalents in English and so I used them as part of the poems mixed in with other languages.   The use  of ‘Feldlerche’  (German for Field lark)  - in the poem  ‘Rate/ Rhythm of Furrow’ on page 18 is one example.

5.     Is a poem like an ecosystem? If so, how?
I think a poem or a collection of poems can attempt to in some way echo the multiplicity and connectivity of an ecosystem. Perhaps by including  a diversity of language and by enacting some of the processes of an ecosystem in its construction. In this collection I have tried to enact  the eco-process of recycling by recycling and collaging text from a diversity of sources.  My daily practice for this collection was to fill notebooks with experience of my environment, both my habitat and ranging wider, this included snippets of conversation, interesting or relevant words from exhibitions, significant or resonant news stories and sounds. Text from the notebooks was then re-appropriated and combined with new text on the page to form these poems.  I usually had a specific theme in mind when each poem was written which at times was suggested by a line or a phrase from the notebooks.

6 .We like the cover! Did you choose it/make it and how does it relate to the themes of the book.

I’m glad you like the cover. In my attempt to enact eco processes while writing many of these poems I also made a series of rather peculiar objects with materials recycled from nature. The one on the cover with its feathers  and some what bird-like stance  bounded by wire and with a small chips of computer motherboard at the base seemed to complement the collection as an attempt to remind us of our abuse of nature and the natural, while also being a play on the title ( at least in my mind!) as it has elements that suggest a ‘Motherbird’.

7. We like the title, particularly as it comes from computing. How does that relate to your insistence on the organic (and even, in your last answers, to your sense that the poem is organic).

The title  came from my feeling that the earth is becoming  like a giant motherboard, You look down a hole in the pavement where repairs are being done and see a confusion of multi-coloured wires. Massive phone towers are appearing everywhere in the countryside everywhere is becoming electric. I suppose that all the electric interconnectivity of our culture in its own way apes the organic interconnectivities of nature. But the installation of so much technology comes at a price for there is with little thought of how it affects the local wildlife and environment and the health of people living nearby.  So my title ‘Motherboard’ very much incorporates my concerns for habitat and environment.

Another inference of the title for me as well as its main eco theme and  play on ‘Motherbird’ was the fact that while I wrote this collection, underlying all of this,  my mother, who died earlier this year, was  very ill in a hospital bed (a kind of Mother-board)with Parkinson’s disease.   This for me tied in with traditional organic resonances of ‘mother nature’ for the title as well the cultural interconnectedness of a vast computer board.

Juliet Troy and the communal voices of WRI 2010 students from Edge
Posted by Robert Sheppard at 8:00 am