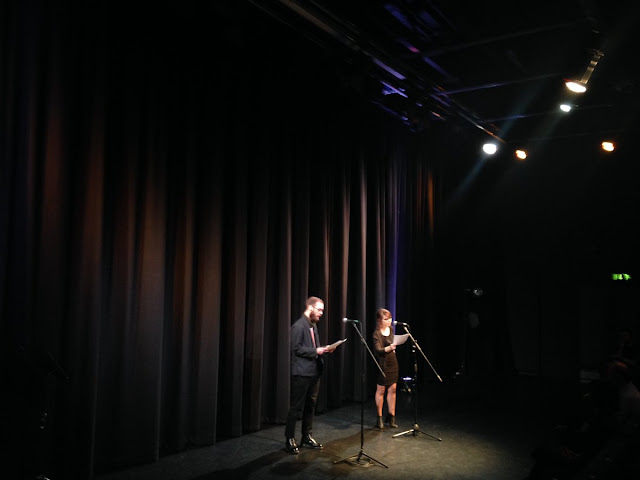 the pairs of poets for this ark and archive:

Everybody was on form, with a variety of tone, and focus, from politics to pataphysics and back again, some strong work from the touring core and from the local pairings including many poets from Edge Hill, who have appeared on this blog before. Well done everyone!

More on the tour here. Videos of all performances are viewable on that sight too, though I have embedded them all on this blog!

And did more than 40 mushers from eight European countries
eat our rich food, pig-killing with rigidly clenched lips
and slightly restrained záviny? Did somebody in Slovakia
abuse my face to skip lunch, and was that someone you?  (Ashcroft and Sheppard: unpublished)

Tiger C. Roholt says, ‘We often understand things we deal with through our boldily actions.’ (Roholt 2014: 99; I'm writing through his book Groove to construct a treatise on metre. This is what I wrote today.) Reading collaborative EUOIA poems last night, under theatre lights, the floor disappeared and was an expanse of black with no edges, no horizon, though it reflected the lights in a blinding pool of glitter at my aching feet. I lost sense of my own balance, but wasn’t sure what sense it was.

This is all on the other side of skill.
I held on to the microphone stand, heard the sound of my grip over the speakers, while Joanne Ashcroft read her lines from our poems.
Habit (like riding a bike, touch typing, motility) suggests poetry performance is continual performance, not this waiting, which cannot be ennobled as listening. Waiting with my two uncertain unrhythmic feet, for my voice to steady me:

I glide off into Perspex fountains, sculptures
celebrating black holes, in slow-time now the work I was
to do is done, I weave ways out of these eternal prisons. (Ashcroft and Sheppard: unpublished)


I am pleased to announce that Shearsman Books will be publishing the EUOIA anthology.  It will be called Twitters for a Lark and will appear in June or July, in time for the EUOIA evening at The Other Room, Manchester.

Posted by Robert Sheppard at 2:53 am