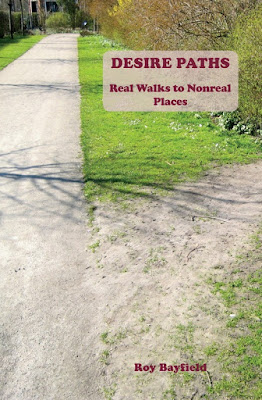 He has had a little influence on my EUOIA project of nonreal poets in that his discovery of Argleton (see here) fed into my borrowing his Argleton University as a place for the Frislandic poet Hróbjartur Ríkeyjarson af Dvala to work for a while (Frisland, like Argleton, turned up on maps in the past) and in the name of the nonreal Edge Hill student Jason Argleton. (For the EUIOA, see here).

Roy comes from Portslade (in Sussex on the South Coast). In one bit he quotes me and explains the Southwick/Portslade conflict thus:

Later after explaining that the face on John Player’s cigarettes was a man from Portslade (so what! we in Southwick say, John Cowper Powys lived here; actually they don’t, nobody cares!) he explains further:

Perhaps I could write, ‘As a child I remembered that the East seemed like East Germany because it meant stepping back into an older generation by visiting grandparents as we crossed the border in the bus.’ But I like the idea of Southwick being uncanny. I do my best: here's the full passage Roy quotes from:

The Given is reprinted and only available as part of my autrebiography Words Out of Time: see here and here. Read my account of writing The Given here.

Where I write about space, place and ambulation is in my prose piece, 'In Adopted Space' in Unfinish. Details here. Its first review from Steve Waling here.