Storm and Golden Sky: We're Calling it a Day (a Friday, actually)


After nearly three years, the organisers of Storm and Golden Sky have decided to call it a day. The decision, I think, was made by the three remaining organisers fairly independently. I definitely felt that the Allen Fisher reading felt like the end, as I organised it alone. It was a great reading, but I couldn’t quite see into the future for another event. None had been arranged.


I’m proud of what we achieved and I was surprised (given I’ve also been smoothly running poetry readings at Edge Hill since 1998-ish (take a look here for a description of that series) and was part of the Sub-Voicive Readings in London for a number of years before that, not to mention the Collected Works readings at our house a few years ago) how difficult it was. The runaround to find another venue for the Brown-Corcoran reading was a steep learning curve. (The staff at Bluecoat were wonderful in accommodating us.) The moment when Elly and I managed to lock ourselves out of that reading (which was in full flow) and our immediate and uncontrollable hysterics perhaps sums it all up.

It was good to organise readings for some of the great writers of our time (look at the list) but I also particularly enjoyed meeting people I didn’t know before, who delighted by their performances: Sophie Collins, Claire Potter, Sophie Mayer, Lauren De Sa Naylor and Nathan Walker. 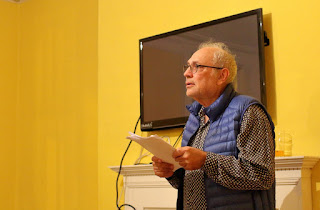 A (hopefully) Complete List of Storm and Golden Sky readings in the Caledonia, Liverpool

May 30th 2014: Joanne Ashcroft and Rhys Trimble (with short set by Nathan Jones)

June 26th 2015: Andy Brown and Kelvin Corcoran (with long supporting set by Maria I. Bennett). This reading occurred at Bluecoat.

NB: Hannah Silva read a short set at one of the earliest readings. 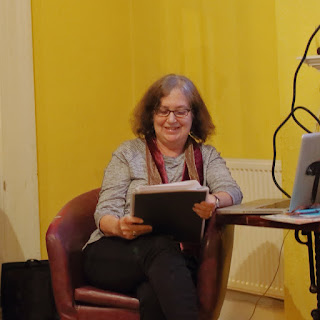 That’s exactly 70 readers by my counting, which is a hit to be proud of.
Reading photographs of Charles Bernstein and Susan Bee, Charles, Susan and Robert Sheppard © and courtesy of Adam Hampton: September 30th 2016.
Posted by Robert Sheppard at 3:23 pm