Robert Sheppard: Essay on John Seed in Poetry and Praxis 'After' Objectivism

Poetics and Praxis ‘After’ Objectivism 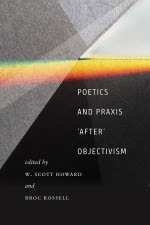 “Poetics and Praxis ‘After’ Objectivism is an important contribution to our understanding of a movement that refused to be labeled a movement. It will be useful for students of modernist and postmodern poetics interested in the evolution of issues first addressed in Zukofsky’s foundational essays, ‘Program: Objectivists 1931’ and ‘Sincerity and Objectification,’ and in the various formal innovations launched by the practitioners. This is a new look at Objectivism’s influence and, equally, a look at the problematic nature of influence in general.”—Michael Davidson, author, On the Outskirts of Form: Practicing Cultural Poetics


Poetics and Praxis ‘After’ Objectivism examines late twentieth- and early twenty-first-century poetics and praxis within and against the dynamic, disparate legacy of Objectivism and the Objectivists. This is the first volume in the field to investigate the continuing relevance of the Objectivist ethos to poetic praxis in our time. The book argues for a reconfiguration of Objectivism, adding contingency to its historical values of sincerity and objectification, within the context of the movement’s development and disjunctions from 1931 to the present.

My piece is on John Seed. The whole book (I have only read the introduction so far) is geared towards the relationship of 'Objectivism' to current literary production.)

I have written critically about John Seed on this blog, here:

A poem from Seed's Pictures from Mayhew was published on this blogzine, here.

And there are transcripts of a great George Oppen interview 1973 that I made decades ago, here.