Robert Sheppard: My 14 years of blogging 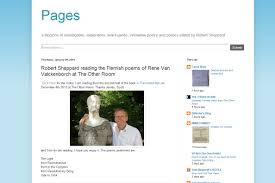 The little block of raw links below will take you to the posts I made after merely 10 years of blogging, trying to make lists of the best, my favourites (one for each year), the most neglected, etc., and plans for the (then) future. It was all quite fun, quite a lot of work, and is still fun to look at now. If I reach 15 years I might edit similar lists.

Here's one of my favourites from the last year: a post about my poem 'Prison Camp Violin', which was the Guardian Poem of the Week, here.

For some years now,  I've been blogging fairly furiously, but I have also started tweeting announcements of my content, and this has increased the number of hits. See www.twitter@microbius. Nevertheless, this year I'm also undergoing the insane task of posting my 1969 diary, 50 years on, more or less each day, and the posts still get a certain number of hits despite being not Tweeted about. They are really going to take over the blog when there's one a day. But I've started it now! And I'll finish!

Probably still the most remarkable thing I have used the blog for was writing the draft of my critical work The Meaning of Form. I showed the ‘working out’ of some of the chapters and parts of chapters (along with digressions, caprices, poetic effusions, poetics, and – frankly – jokes) in numerous posts, and they are arranged, for scholar and lay-person alike, at what I call a ‘hub-post’, i.e., largely a page of links to all the posts pertaining to the chapters of the book in its earliest form: HERE. (I think I invented the phrase 'hub-post'.) I was acutely aware that the lay-person might not get a chance of seeing the final thing.

Another of the changes is the introduction of 'temporary' posts. Initially this was a device for dealing with announcements of upcoming events, particularly about readings. Physically, at Edge Hill, I would remove posters after an event, and I began to do the same online. Most, though, I decided to turn into set lists, indicating what I was reading. Like this post about the Ern Malley Orchestra performance I was involved in:

This then extended into the practice of temporarily posting the latest poems in 'The English Strain' project, in short, the poems about Brexit. It seemed to make sense to 'get them out there' as soon as possible, but also to not 'publish' them, so I could reasonably expect a magazine to publish them subsequently. I also post little skits on Brexit too, which are kinds of thinking with the dreadful things as they exist (if you know your Zukofsky). I particularly enjoyed Michael Go's Brexmas message from the dogging sites of Britain (all that will remain after leaving). That may still be read here:


And I've come across wonderful pictures too: thus: 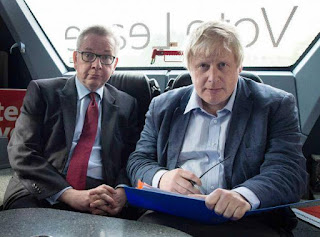 You can read about the whole ‘English Strain’ project in a post that has links to some other accounts, and earlier parts, of this work: here. That was 100 poems long.

One temporary post, around Christmas, I turned into a permanent post (by removing the poem). It outlines what I'm doing with the sequence:
https://robertsheppard.blogspot.com/2018/12/robert-sheppard-my-latest-write-through.html

Some while back I posted this interview with me about my literary blogging. Read it here.

The pre-history of this blog, as a print magazine, may be read here, on what was my first post (even though I moved it later). However, the first edition of the print magazine is now online, and I post links to Jacket2 where it is hosted here. I also outline the complete run of the second series of Pages before it became a blogzine, and finally this blog.

Do have an exploration of what I have posted in the past. Did you, for example, ever read Bill Griffiths' 'Ghost Stories', six of them. They have never been collected. The first of them is here. (Note to self: I need to do a hub post for all of them.)