Pages (first series) reissued entire with an interview on Jacket 2: Complete Index of all 5 series

This blog is called Pages because it was originally a blogzine continuation of the print magazine of that name. It still may be partly that, though it is more of a writer's or literary blog now (and is archived by the British Library as such). 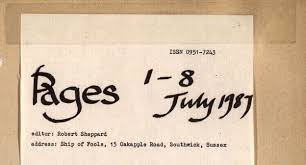 Quick hits of the New British Poetry as they happened

I am pleased to say that the first series, which ran from 1988 to 1990, has been digitalised (by the energetic Manchester poet and critic Joey Francis) and is now available on Jacket 2 here.

There is also a recent interview with me (again, conducted by Joey), where I talk about the project from the inside, though I stray into defining 'linguistically innovative poetry' and the experience of homelessness. Read that here.

Everything is linked from the Pages Reissues page. Click onto each individual 8 page issue. Thanks to Danny Snelson, the Master of Ceremonies at Jacket2.

When I started this blog I reprinted editorial matter from the second series of Pages and thought of this blog as the third series (see the links below).

But there's enough to keep most poetry-lovers quiet on the re-issue pages of Pages. Thanks to Scott Thurston for initiating this project, to Joey for doing the leg-work and the interviewing, and to Jacket 2 for seeing fit to make it available again, in all its (deliberate) lo-tech glory.

The Poetry Foundation comments on the reissue, see: https://www.poetryfoundation.org/harriet/2018/07/jacket2-reissues-pages

resources for the linguistically innovative poetries

Pages 362-380 Rod Mengham/Virginia Firnberg (no poems by either)

Then, 2005, Pages became this blog. I attempted to carry on numbering the pages and frequently provided an index (for example here). These were superseded by the invention of links. But you see I was continuing to publish poets's works: Tony Trehy, Dee McMahon, Marianne Morris, Ian Davidson, for example.

Here is the editorial to Pages, Third Series.

The Fifth Series of Pages was planned to celebrate the tenth anniversary of the Edge Hill University Poetry and Poetics Group on October 21st 2009, and it did, here, but after that I began to treat this blog as a literary blog and I had long-ceased to attempt to carry on the numbering of the pages of Pages: it's not the digital way. I talk about the blog (as a blog) here in another interview that complements the new one with Joey Francis.
Posted by Robert Sheppard at 8:00 am