Robert Sheppard: My twittersonnet 'Dwarf Planet' is part of the KFS poetry illuminations in Blackpool 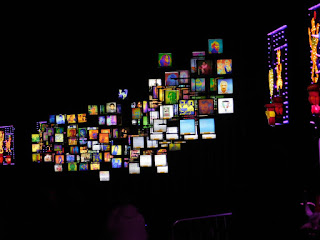 My 'twittersonnet', 'dwarf planet' is part of the Knives Forks and Spoons Blackpool Illuminations at the moment and here are two of Alec Newman's photos, one of the whole display, and the one below of the poem itself. 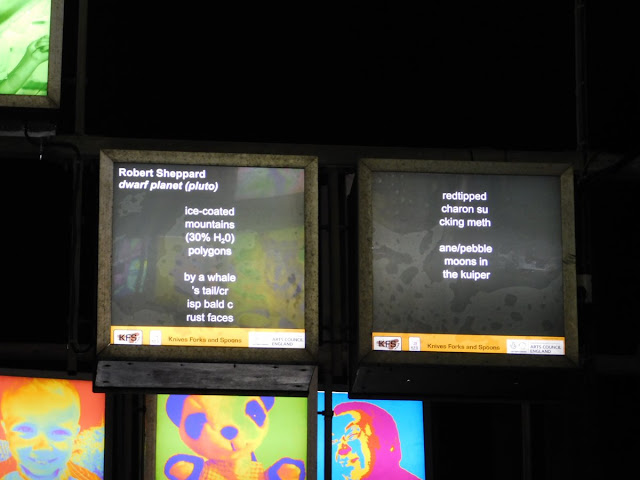 The 'twittersonnet' was invented by Rene Van Valckenborch (though I invented him) and his and mine were both first platformed on our respective Twitter accounts, though his also appear on this blog (see here)

They were commissioned for the ‘life is short: art is shorter’ mini-festival held at bluecoat on november 15th, 2015, curated by professor ailsa cox , as part of the nationwide being human festival. see
http://robertsheppard.blogspot.co.uk/2015/11/robert-sheppard-life-is-short-at.html

They come from a sequence now called ‘Minute Bodies: Twittersonnets’. Some were published online in Noon: here.

the first twittersonnet (and other twitterodes) may be found in the works of rené van valckenborch in robert sheppard’s the translated man (shearsman, 2013) and the second in his petrarch 3 (crater press, 2016). the (then) constraint of 140 characters was distributed across the 14 (8+6) line frame (or minute body) of the sonnet, 10 characters or spaces per line. Here irt is again:

ane/pebble
moons in
the kuiper