Robert Sheppard: A Petrarchan Sonnet in the Style of Wayne Pratt for Patricia Farrell

At the VE Night piss up, the gloom of the Blitz, the chill
Of V2s, Goering’s capture, Berlin scorched, were recalled.
Then forgotten, the old girls squawking along with Al Bowly.
On our first rendezvous we’d landed on this lot.

But this wasn’t the time for cockney triumphalism;
The cheeky young man in the SS glad-rags
Tickled the dollies’ flab. They all roared
Till they pissed their bloomers, pickled in gin.

They fondled me and petted me and Love had to wait…
We sat up all night lost in the depths of each other’s eyes,
My hand just inside your blouse. My excuse was scabies,

And you were under orders to declare your bunch of grapes.
At dawn, we walked around the railings, Clissold Park.
Inside we could hear the parakeets sounding the all clear. 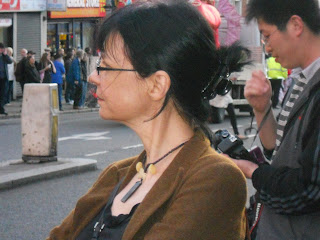 This ‘version’ of Petrarch’s 3rd poem relates the events of the fortieth anniversary of Victory in Europe Day 1985; however, the poem is signalled as ‘after Wayne Pratt’, a fictional poet I invented in the 1980s to parody the mainstream poetry of the time, and so the tone is distorted though the story is true, and both are of their time, as it were. ‘It didn’t seem the time for shields and armour,’ in my translation authorizes a sense of inappropriateness registered in some of my versions; ‘But this wasn’t the time for cockney triumphalism’, the VE Day poem continues, though the (genuine) martial details are indeed surprising, a guy in an SS uniform (pre-Prince Harry Fancy Dress scandal). (Retrospectively, I detect the tone of Eliot’s Four Quartets here among the Pratt tropes and the ambiguity on the medical and military uses of ‘all clear’; the narrator’s ‘excuse’ to not make love is his ‘scabies’.) This is indeed how Patricia and I got together as transmitted via Petrarch and Wayne Pratt. See here and here for other ‘versions’ and here for other versions of Petrarch.

Visit the Patricia Farrell Celebrations Hub Post (with links to all the rest) here.

Read the original and the dog version:

'Petrarch 3' is now in print, see here and here. It is the first part of The ‘English Strain’ Book One, The English Strain, which will be published late 2020; read about it here .
Posted by Robert Sheppard at 8:00 am