POEMS IN PROGRESS : a new book of poets' drafts from the British Library (featuring Lee Harwood and Bob Cobbing) 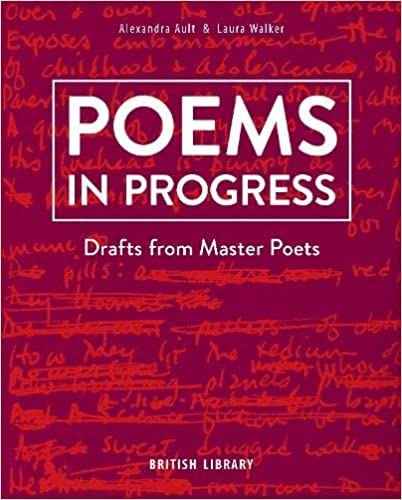 This is an interesting book, which I have received as the literary executor of Lee Harwood’s estate (he’s in it; more of that later). The British Library (for text, sound and video) are undergoing exciting developments, which will involve all kinds of archives going online. They have a copy of my tape cassette magazine 1983 (from the mid-1970s), and have digitalised some of the contents of number two, a whole side of Lee Harwood and even an early multi-tracked studio piece by me, ‘The Lover’. (Yes, I did know how to edit tape back then.) This is good, but it is a shame that nobody can locate the Master Tapes for 1983 which I donated to the National Sound Archive years ago, but are not in the collection now. (They also have a recording of the Allen Fisher Poetry Buzz, which I write about here, and Patricia and I are both on that:  https://robertsheppard.blogspot.com/2005/07/poetry-buzz-bus-ride-withand-for-allen.html. ) And loads of other stuff!

For now, we have this book. It is fascinating, although not all of the texts are drafts, and are in fact manuscript copies or special editions. Of course, there have been excellent draft-editions before now, notably of Eliot’s The Waste Land. There are ancient texts as well as a few contemporary poets, from Hafiz to Rebecca Goss. The contemporaries (while not always to my taste) show their workings-out in public, which is generous. Manuscript copies of already published poems don’t excite much, but two glimpses of Coleridge’s notebooks, Blake’s scribbles, war poets’ drafts, Eliot’s letters, Sappho’s papyrus, EBB’s sonnets, Lewis Carroll’s original ‘Alice’ book with images, Gascoyne’s translation of Jean Follain, Andrew Salkey’s typescript for a printer, etc, etc, are fascinating enough to make this an entertaining book.

The two interesting grabs (from my point of view) from the British Library itself concerns Lee Harwood and Bob Cobbing.

Lee’s collaboration with John Ashbery is going to appear in the New Collected Poems that Kelvin Corcoran and I are currently editing for Shearsman. (See here: https://robertsheppard.blogspot.com/2022/01/lee-harwood-4-poems-and-note-on-them-in.html

This is it, as it will appear in our book. A taster:

and then discord the records-file

which way the stage perimeter OK

‘back!’ So until January

telegraphs twitching north to so and so

and a handkerchief slowly chopping heaves

‘ne nous fachons pas’ so that the houses

laughing in your eyes nearer the bang

lovecog – did you really understand what I meant by that?

the farmyard in an uproar of freed peasants’ cough

drops ah the old dogs at the window

but my love for you outgrew the shed

tools in disorderly heaps and wasps

a beam sagging into twisted visions of nowhere

and at this the small engine appeared from the siding

to inspect the phantoms and slowly disappear. 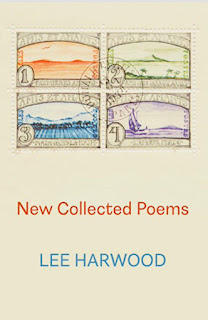 What is different about the draft manuscript version is that we can see who wrote what. (Maybe that wasn’t the intention, because Lee doesn’t even tell us who the collaborator is! Perhaps as in some of my collaborations (about which I write here: https://robertsheppard.blogspot.com/2020/01/robert-sheppard-thoughts-on.html ), Harwood and Ashbery wanted to become the third author without differentiation, or perhaps they didn’t. Indeed, also printed here is a typescript of the poem, with Ashbery's contributions underlined. But to see the manuscript you will have to obtain the book, I’m afraid. The spacing is quite different from the published version. Neither Mr Corcoran nor myself can tell you what a ’lovecog’ is, but I can reveal that that phrase is in Lee’s handwriting!

The Bob Cobbing contribution is his 1951 notebook ‘Two Experiments’, and one is a word list for the now familiar (and oft performed) ‘WORM’, the other a contemporary word-list poem-draft, ‘Snow’. You can hear the eventual sound poem ‘Worm’ from about ten years later on the video below. There follows a fair description of Cobbing’s procedures, and we read the exciting information that the BL has over 300 reel-to-reel recordings of his work (as well as other recordings, such as my edition of 1983 number two which I speak of above). There is a later visual text printed too, which is odd because 'WORM' also exists as a visual poem (again, Cobbing waited for 10 years until duplicator technology enabled overprinting).

My collaborations with Cobbing are now published by Veer. See here: Pages: COLLABORATIONS (Bob Cobbing - Robert Sheppard) published in a box by Veer - out now. 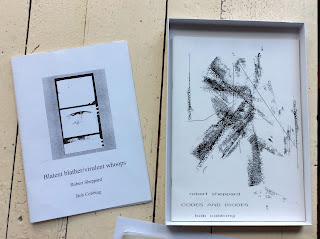 Thinking of recordings, I have a cassette recording of Verse and Perverse and Bob and I did record a video together of Blatant Blather/ Virulent Whoops, the two texts in Collaborations. That might be in the collection. The cassette tape is destined for my archive, I suppose, unless it gets lost.

All of the catalogues of the BL collections may be consulted online.

The BL also archives this blog.

Posted by Robert Sheppard at 6:30 am