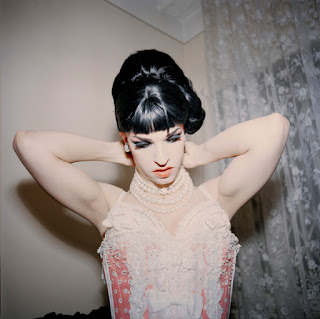 Austria’s  Sophie Poppmeier (1981-), created with Jason Argleton, who also doesn't exist, says 'Don't Leave the EUOIA!' (European Union Of Imaginary Authors).
Sophie Poppmeier’s poetry includes Book One (2002), Book Two (2003), and Book Four (2015). She has lived in Vienna and Bratislava, but currently resides in Berlin. A neo-burlesque dancer, Poppmeier performed as Minnie Minerva (but occasionally as Polly or Poppy Polidori or – in Berlin – Angela Merkin, although that was not to disrespect the EU). Her best acts include the ‘Ute Lemper Trilogy’, based on Punishing Kiss, a 15 minute piece combining the swirling silk sea-waves and bejewelled seashell bodice-work of ‘Little Water Song’; ‘Streets of Berlin’, a mimed drag-king boylesque; and ‘You Were Meant for Me’, in which she confronted the audience with ‘unbridled displays of female desire’, to quote a programme of the time. Her later ‘Narcotango’ used the hypnotic grooves of Carlos Libedinsky’s new tango for her exploration of intoxication, obsession and trance. In contrast, the energetic ‘Neveen’s Levee’ involved Oriental and belly dancing, and the accompanying poem is a lipogram. ‘Madame Mallarmé’s Fan Dance’ was the most literary (and least appreciated) of her acts, and the accompanying poem rhymes! Her memoir Minnie Minerva’s Book of Marvels has been forthcoming for some years. Despite its title, it is a theoretical defence of burlesque, and has been compared to Augusto de Campos’ work on bossa nova. In it, she argues that burlesque is an enabling and safe but public way of exploring and asserting various conflicting models of female body-awareness (not just beauty) and female fantasy and sexuality (auto-, homo-, hetero- and trans-), and draws on her experience of facilitating workshops for differently-abled and neurologically atypical people and running the annual pan-European Ugly Bug’s Burlesque in Bratislava. Poems from her controversial sexually explicit Book Two, which abandoned the ‘corsetry’ of her characteristic four line stanza, have been excluded from this anthology. Perhaps in reaction to the criticism of this book, she is said to have given up poetry and burlesque (on the brink of considerable success at the Berlin Burlesque Festival), but the truth may be less dramatic, since she studied Art History in Vienna, gaining a PhD in 2010 and it is not clear that she didn’t continue writing, while teaching and theorising performance (and she is rumoured to have ventured out under cover of several new alter-egos when impecunious). She is also rumoured to be collaborating with Trine Krugelund, the EUOIA representative from Denmark. (JA)

One of her poems may be read at http://tonyfrazer.weebly.com/robert-sheppard.html

Other posts about this poet and performer include:

One of Sophie's uncollected poems below:

‘My thighs bulge like chicken drumsticks
but I’m still shooting behind my mask. Its face
became punched by a streak of white before its starry eyes.
My wife shares these swellings, though sexier.

She makes foreign policy with giraffes, social theory
with foxes, traffic regulations with natterjacks.
These bulges could be testicles and the students laugh,
setting fire to the fleet. I couldn’t move to help them.’

Jason Argleton was a student at Edge Hill University where his final dissertation was a comparative study of the poetry of Ern Malley and Bob McCorkle. He is pursuing practice-led graduate studies on Ossianism. Poems have appeared in various magazines, including Pages, and he translated Sophie Poppmeier’s notorious Book Two into English. Argelton is co-curating an anthology of fictional poets, the United Nations Platform of Poetry (UNPOP) drawn from the approximately 200 nations (and disputed territories) of the world, from Afghanistan’s Hamida Sulemankhel to Zimbabwe’s Pakuramunhumashokoanowanda Nevermore.

If Britain votes to leave the EUOIA on 23rd June, Robert Sheppard, the British representative of British imaginary authors, will have to be excluded from his own anthology, EUOIA, which he is conducting and collaboratively writing with other writers; at the very least he will be moved to the Appendices with Frisland’s Hróbjartur Ríkeyjarson af Dvala (whom he created with Eiríkur Örn Norðdahl). To find out more or less about the EUOIA check the EUOIA website which is still live at http://euoia.weebly.com, and there are multiple posts on the subject of the EUOIA on this blog (use the keyword EUOIA to see them all displayed, and then check). 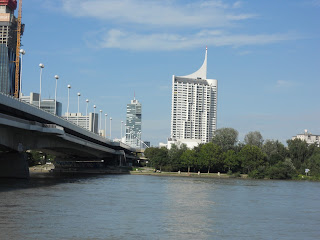 I am pleased to announce that Shearsman Books will be publishing the EUOIA anthology.  It will be called Twitters for a Lark and will appear in June or July 2017, in time for the EUOIA evening at The Other Room, Manchester.
Posted by Robert Sheppard at 8:00 am