Yesterday, a day of collaborations, without fully realising it. Until reflecting this morning.

It began with writing through some of Trev Eales' photographs in preparation for our collaboration. See here:


Later, I read more of EUOIA collaborator Alys Conran's brilliant first novel, Pigeon. It's grim, it's funny; it captures the nuances of bilingualism, and I haven't finished it. I seldom read a book where I don't want it to end. This is one. See here:

Then it was out to the Liverpool Light Night, and to Bluecoat to look at the many paintings Pete Clarke has produced using my poem about the Liverpool car park fire, 'Arena Area':

parked in the park forever

a darkness that darkens the lungs
concentrated pitch 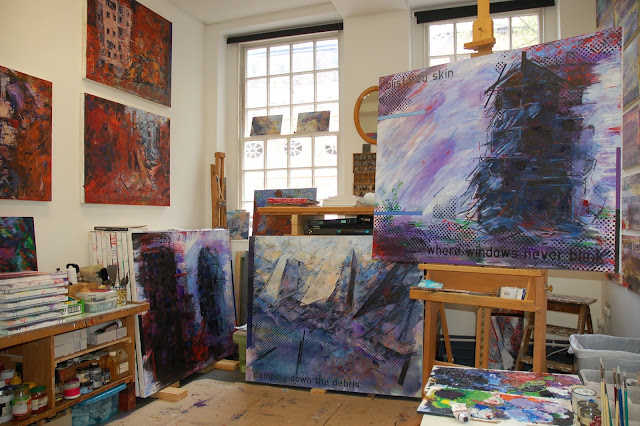 That's one of them in the Bluecoat studio: 'blistered skin...' it says...


Pete has collaborated with me (I have collaborated with him) on making a number of prints and paintings over the past decade and I posted images from our Edge Hill exhibition here and here. A later work for the Print Bienniel in Krakow may be viewed here and Pete's own website is here. One was a runner-up for the Adrian Henri Prize, and this year his work has been selected for the John Moores Painting Prize! Fingers crossed.

Then, from the very windows you see in this photo, I spotted Jo Blowers, watching a dance piece, with whom I have worked over many years. She'd been ill so it was great to see her out and about! And to talk. 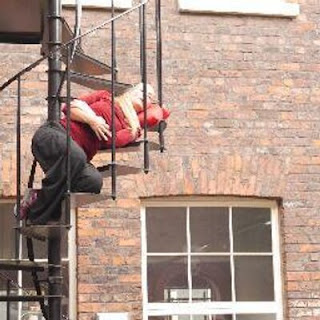 Here's Jo performing (appropriately) at Bluecoat, a piece with a text by me (published in Unfinish). Some links to her work, our works:


Then we (Patricia, Philip Jeck and I) walked to the Belvedere and I checked that they had put up the poems about the place by Chris McCabe and myself (a collaboration of sorts) - and they had. (More of that later, I think.) The whole day being spent in the company of Patricia, my most consistent collaborator (and currently an author of a piece on my collaborations with Pete!), as well the other half of Ship of Fools. (And so much more.)


Odd then that I should wake up to find a note I clearly made to myself the night before: 'Write a book about Frank Sinatra - and you.' I wonder what I meant.

I have a page on my website about my collaborations (outside of the EUOIA), here:

Posted by Robert Sheppard at 11:01 am