But not 10 years ago TODAY! I forgot the date, last month, the 15th. It was published by Salt on the day of the launch in 2008 at Bluecoat, of which two recordings may be seen here. What is not recorded is the panic earlier in the day, tracking the books as they moved across England, towards Liverpool! But arrive they did, too late for me to learn to read from the volume itself, to navigate its 400+ pages, but soon enough to be able to sell (a lot of) them. Ade Jackson filmed these two extracts from the Poetry in the City event he organised. The first clip contains 'Smokestack Lightning', using some of the dying technology I had used for a London performance in 1990 or so; the second is 'A Dark Study for Lee Harwood', a quiet affair, in lineated prose, a form of the late 1990s. I write about the event here. (And give the text of 'Smokestack' too. It is not easy to hear what I'm saying at times, since I move around and manipulate tapes. I think the audience could hear.)

The book, now available in a paperback edition, can be purchased here.

There are some more details of this massive project there too, though the publication date given is wrong! It was April 15th 2008. I hope if you haven't got it you will consider playing a decade-long worth of catch up!
Twentieth Century Blues was written  between 1989-2000, and incorporated earlier texts when it needed to. I think of the book now as the first volume of a collected poems. In fact, the book in full is called Complete Twentieth Century Blues.
Twentieth Century Blues is a network (or ‘net/(k)not- work(s)’ as I called it) of texts that are interrelated by 75 multilinear ‘strands’. That the project would seem open to the technology of hyperlinks did not pass me by, and I would like to utilise this in future presentations, although I conceived of the network’s design before this possibility, or its now apposite metaphor, became available. Imagine the strands as links. ('Links in Ink' was actually the title of the evolving index that I published serially throughout the project's writing. Or it was the title by its end.)

I can be seen reading some poems from Twentieth Century Blues here as part of the Other Room Readings in 2008. (On the first clip I read ‘A Dirty Poem and Clean Poem for Roy Fisher’, ‘From a Stolen Book’ followed by a selection from ‘Empty Diaries’, the sequence with which I continue on the second video, if there is one through this link.) 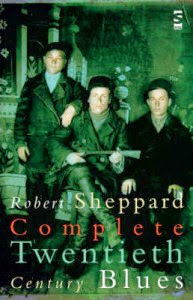 The BIG book (I didn’t think there would ever be a big book) collects some previous publications, like

and some materials were displayed at the Ship of Fools Exhibition last year, in this case, relating to the long poem ‘Schrage Musik’.

Mark Scroggins’ book chapter on it may be read about here
https://robertsheppard.blogspot.co.uk/2017/01/a-chapter-on-twentieth-century-blues-in.html

Not everybody liked Twentieth Century Blues. Here’s account of a negative take by Andrew Duncan.
https://robertsheppard.blogspot.co.uk/2016/03/steve-spence-on-andrew-duncan-on.html

The accusation of being 'overheated' (the poem, not me; I can regulate my body temperature), probably relates to the sequence of 'Empty Diaries' (1900-2000) that runs through the project, and which is read from on the Other Room video. Here's one:

I clearly haven't learnt my lesson because I've extended the sequence out of Twentieth Century Blues (the only permitted extension of the strands noted in the multiple sub-titles, as above), as a sequence 2001-14, a corona of sonnets, but not part of the 100 sonnet book I'm thinking of calling Hap Hazard.

The first eight appeared in The Literateur. Find them here or here.  The final six appeared in an edition of Blackbox Manifold. See here. Here's part of one sonnet:


The 2015 one was published in India by Ranjit Hoskote at Poetry at Seagam. Empty Diary 2015

The 2016 Empty Diary was published in the special 50th issue of Erbacce. See here. Empty Diary 2017 is as yet unfinished, still tweaking it; I haven’t written 2018 yet (though I have written 2055, and 1327 for that matter!) So Twentieth Century Blues possesses this extensive pod.

The title of the book Twentieth Century Blues refers not to the kind of blues I have sung (and do, again, briefly, on the 'mythology of the blues poem, 'Smokestack Lightning', above), but to a kitschy Noel Coward song from 'Cavalcade'. Have a listen... Three versions: Noel Coward in a version from the 1950s; the song as featured in the 1933 - was it? - film; Marianne Faithfull in a Weimar version...
Posted by Robert Sheppard at 8:00 am