One of the poems in Petrarch 3 derives from my writing the chapter ‘Stefan Themerson: Iconopoeia and Thought-Experiments in the Theatre of Semantic Poetry’, in The Meaning of Form, with its study of the literary form invented by the Polish-British writer Themerson in his 1944 novel, Bayamus: the Semantic Poetry Translation.[i] In (too) blunt summary, this proto-Oulipean procedure ‘translates’ a text word by word into its given dictionary definitions, and uses lineation to orchestrate the results. When Themerson, whom I knew a little, died in the 1980s, I attempted a Semantic Poetry Translation of one of my own poems, but it did not work (possibly because my original was asyntactic). The debt was finally paid by my deliberately prolix text that re-articulates, re-forms, Petrarch’s poem. 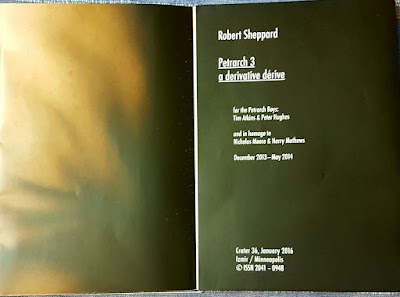 When it came to the word ‘love’ – not a marginal term in the Petrarchan lexicon! – I discovered that my normally trusty 1972 dictionary gave me the cis-definition:

the devoted attachment to one of the opposite sex

This was obviously an anachronism and I amended it thus, immediately, in the thick of creation:

the devoted attachment to one of the opposite (or same) sex

The gay version. It seems to me obvious now, of course, after waking up in the middle of the night, that this definition will no longer do either, expressing as it does heterosexist and gender norms in this age of gender fluidity and transfeminism (and transmasculinism, for that matter). (My essay on Themerson does point out that his dedication to the Semantic Poetry Translation (also see his poetic masterpiece, 'The Semantic Sonata') carries the political charge of exposing language to ideological analysis by using definitions, and usually this works; my experience creates the caveat: it depends, which, whose, dictionary.) After rejecting a formulation like

the devoted attachment to one of the opposite (or same or indefinite or transitional) sex,

(as too clumsy) I consulted another dictionary, and manufactured this definition:

the devoted (the given definition had 'deep', but I liked the chivalric note appropriate to Petrarch, in this context) affection or sexual love for someone (else)

So: the devoted affection or sexual love for someone (else).

I like the ‘else’, which, I have to confess, is also my confection. In subsequent editions to the wonderful Crater edition, which is still available here, the lines:

It didn’t seem the time for shields and armour
Against Love’s arrows, his batters and blows;
So, unsuspecting, I wept with the world,
But that day my heartbreaks began, my woes, 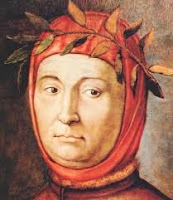 Read the only review of Petrarch 3 by Alan Baker here. And a response from Martin Palmer here.
[i] Stefan Themerson, Stefan, Bayamus and the Theatre of Semantic Poetry (London: Gaberbocchus Press, 1965).
Posted by Robert Sheppard at 8:00 am