I've been celebrating the National Days of the countries whose poets I have swelled the numbers of by inventing new ones! This is a special one, and the last. (And may well be the last of my special EUOIA posts too, and it includes possible plans for the future.)

Celebrate Belgium’s Independence Day with European Union of Imaginary Authors poet Paul Coppens, who was co-created by myself and Philip Terry, and with Rene Van Valckenborch, my original Belgian invention! So a bit of a double, or a treble, if you include Philip!

René Van Valckenborch is noted for writing in both Flemish and French. Publishing between the years 2000-10, his books (in French) include masks and other masks and glance poems. In Flemish, his projects include The Fuck Me Shoes Chronicles (though no parts of this are translated - yet) and the online European Union Of Imaginary Authors: 27 Translations. He was President of the EUOIA until 2010, when he was deposed by Hermes, and he disappeared (but not in a good way). A generous selection of his work, translated by Annemie Dupuis and Martin Krol, was published as A Translated Man (Shearsman, 2013) with an introduction by Erik Canderlinck and an authorial imprimatur from Robert Sheppard.

Read a piece of Van Valckenborch’s critical prose (not included in A Translated Man), an account of the cinema of forgotten Belgian film-maker Paul Coppens Snr, father of the invention of Philip Terry and myself,  here.

Rene, a real troll, also Tweets here. There are three of his 'twitterodes' here! Most recently he has decided to adopt the middle name Pelikan for the length of 2018. More on him here at these links (which themselves contain further links):

And here's me at The Other Room some years ago, where I read his Flemish poems.


Read an early account of Van Valckenborch here; the book is also available from Shearsman here: 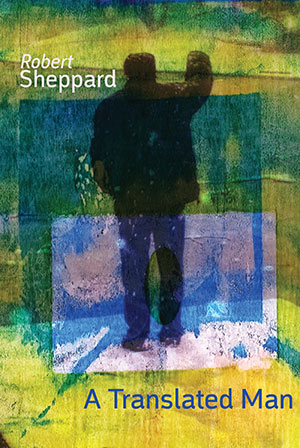 Together Philip and I worked on the antonymic translations of Rene Van Valckenborch's quennets (which appear in A Translated Man) for the corpus of Rene's exegete and friend Paul Coppens. We wrote them two words at a time, a deliberately insane method that took six months to complete. They literally turn Van Valckenborch's poems inside out, and represent another of the links between these two books of fictional poems.

I see these two books as the first two parts of a fictional poetry trilogy. So what will part three look like? One possibility is that Van Valckenborch returns in some way, like Bob McCorkle perhaps, in Peter Carey’s wonderful novel My Life as a Fake, and takes over again. Who knows? The unseen Fuck Me Shoes Chronicles might be entertaining to complete. Or would he write new poems? Would they be in Dutch or French? In any case, I have posited a possible (but quite different) continuing fiction here, but I am unsure how this may be used now (and whether it would involve Rene). I also re-read my short story 'Tropp' the other day. I'd forgotten that this story about a Czech Esperanto poet was a sort-of 'dry-run' for Rene, although I thought the story (which I'd not looked at for a while) was OK. It is published in my 44 pp volume of 3 stories The Only Life by KFS. You can still buy it here.

20th July 2018: A vague apprehension, reading Erin Moure's fine selected poems, Planetary Noise (and the selection of poetry and poetics we made for Atlantic Drift), of how I might adapt her way of marshalling her fictional 'circus animals'. They re-appear at crucial points, as names, alter egos, (m)others, analogues (and the opposite of those four characteristics). They are part of a poetic and plastic polylogue, NOT bit-players in a fiction. (I've done that: twice). [list of free characters, not collaboratively composed - obviously I can't continue with any of those that are)] 13, plus 'Robert Sheppard' of Twitters, as Moure has an 'Erin Moure' or EM. Bad Prophets Err, in my anagrammic case.... To move away from the writing of fictional poems to the creation of a textual web which could incorporate many of the ideas I've been gathering with each of these 'national day' celebrations. Even this here, though it would become quite fragmented in this new guise. Let's leave that now. (August is time for my summer break from blogging. August might be your time for reading: see here for my take on some of Erin Moure's work, working notes for my chapter in The Meaning of Form on her exacting work.)

You can read more about the European Union of Imaginary Authors here and here. All the collaborators I've worked with are accessible via links here; our resultant works are collected in Twitters for a Lark, published by Shearsman. Videos of The Other Room special EUOIA evening last August, which have only this week become available, may be accessed (variously) here:


And check out a review by Billy Mills, who thinks the EUOIA should hang up its multi-coloured Rimbaudian letters, here.