My REF description of my book Words Out of Time: autrebiographies and unwritings

As I said also recently, I may be retired from Edge Hill but they can still use my publications from my period of employment in the dreaded REF exercise. Part of the process for those entering creative writing involves the writing of a 300 word introduction to the work. I thought I’d put them on my blog. I don’t think I’ve perjured myself. In fact, I don't want to write anything for the process that I didn't make public.

But for Words Out of Time, these be the words; I’m not offering them as a model, but they might help somebody write their own. It might also – in this context – draw people’s attention to the book, persuade them to buy it even. 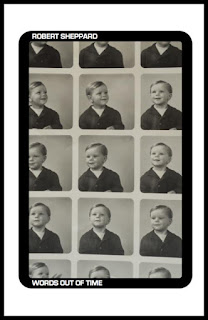 Words Out of Time: autrebiographies and unwritings. Newton-le-Willows: Knives Forks and Spoons, 2015


The first part of this work began as a project – out of an existential dilemma – to deal with particular MATERIALS: the piles of journals, diaries, and less categorisable autobiographical writings that I have accumulated since 1965 when they began, and that I have periodically attempted to use for writing. In its opting for PROCEDURE it is thus a conceptual project, but is perhaps not quite an example of ‘uncreative writing’ as that term has come to be used, but is a creative ‘unwriting’, to adapt a term I have used to describe my earlier texts refunctioned or re-moulded from others. Perhaps the work might be thought of as an ‘unwriting through’ of the MATERIALS, but such proliferation of terms is only useful if it assists a gloss on PROCEDURE.

The result of the ‘coherent deformation’ of the materials is what I call an ‘autrebiography’, a shaped narrative that concentrates upon certain aspects of the diaries. The most anthologised piece, the opening ‘I Don’t Remember’, catalogues the incidents in my diary of which I have no recall. Thus the piece may be described as an anti-memoir. One part two of the work proceeded by interrogation: each sentence is a question. It also covers a short space of time. The second part, ‘Arrival’, features the voice of a near-imaginary female sibling, constructed from re-examining diaries in such of female utterance, actions and agency, and transforming it. The third part, ‘When’, is even more conceptual – hence the titles, ‘With’, ‘Words’ and ‘Work’ moving through writings, photographs and diaries (again with an asymmetrical relationship between account and chronology: more as each year passes). . As such it is an exploration of subjectivity in text. Indeed, since publishing the piece I have come across the articulations of creative memory in the work of Rosi Braidotti; she says: ‘Remembering is less about forgetting to forget than about retaking, as in refilming a sequence: it is about differing from oneself.’


(Part of this material may be seen this year, since I am blogging my 1969 Diary, daily, 50 years after the event(s).) But it's only a very small part of the material!

I wrote in detail about producing the first part of Words Out of Time, ‘The Given’, here.

Buy Words Out of Time here.

I explain the writing of the supplement thus:

My book Words Out of Time: autrebiographies and unwritings (Knives Forks and Spoons) ends with a piece entitled ‘Work’. In that version it finishes not with a full stop but with ellipses. That’s because its focus, the world of work, acts of, commitments to, actions of labour, wasn’t over for me at that time (the book appeared in 2015). Formally, the text distends time, or slows it even (the original idea was 15 words for unwritings of diaries when I’m 15, 50 for when I was 50, and thus 61 words for when I was 61, etc, but that broke down to nevertheless leave the general effect). That means that the text covering 2011-17 is as long as that for 1965-2011! (I was reacting against the fact that most conventional (auto)biographies spend more time on their subjects’ early years, and I wanted this section to ‘do different’.) Here’s the end of the end.

There is an ‘outtake’ here:
http://robertsheppard.blogspot.com/2013/12/robert-sheppard-say-when.html

Access the other REF statements on my 2014-2017 output via links accompanying the first one here:
http://robertsheppard.blogspot.com/2019/03/writing-my-ref-300-word-statement-on.html

Posted by Robert Sheppard at 4:44 pm