Forty years ago today I visited Malcolm Lowry's grave in Ripe, Sussex. Studying the book on the Creative Writing MA with another Malcolm, Bradbury, and being influenced by my friend Mick Bailey, who loved the book (and the man), I made the pilgrimage. I took photos, I made notes. I wrote a poem. Ten years ago I unwrote the poem (quoting bits in quotes), described the photos (in italics) and added commentary, and produced 'Malcolm Lowry's Land', a prose piece that appeared in  From the Mersey to the World, eds. Bryan Biggs and Helen Tookey, Liverpool: Liverpool University Press, 2009, one of the first of the 'Firminist' activities in Liverpool to celebrate Lowry. Here's the bit where I find the grave:

The clock on the Church of St. John the Baptist tells me it’s 25 to four. I peep through winter trees barely knobbly with buds, fisted tight against the growing cold that I sense in the watery blue air dropping frosty towards earth. All life is harbouring underground. A brick tower, washed in the same sandy light as this morning, castellated at its tip, wide-buttressed below. Mean east windows, possibly stained, but probably just latticed with lead, darken the interior. Broken fences draped with brittle brambles, thornset. You approach carefully, step through to search, camera at the ready, lens cap in your pocket. You record the moment. ‘The sudden shock of the grave: /Malcolm Lowry 1909-1957.’ This modest plot is ‘budding with daffodils its length’ you write. Looking again, they might be crocuses, with their bitter chalices still clenched by winter. A stubby slab, as though but half-risen from the earth, the name and date clearly chiselled. Tufty grass on this shifty, uneven, but untrodden ground. Sunken graves with tilted headstones surround it. In a late version of the poem I find: ‘no goldenrod in a gin bottle/ as homage!’ It’s somebody else’s anecdote about visiting this place, something he or she found here. In any case, you wouldn’t recognize goldenrod, even from Lowry’s writing, which merely names it. Instead I think of the legendary bottle of Flower’s bitter, emptied on the grave’s first closing over, a piss-puddle on the fresh soil.

I have never republished 'MLL' (though I have nominated it as an 'Assay' in the footnotes to my autrebiography Words Out of Time (see here)), and I have supplemented it with two poems (one on the blog, see the link below, and one awaiting publication in The Firminist). It is amazing to think about the amount of re-publication, scholarship and celebration that have transpired in the decade since I wrote the afterword to 'MML' in which I write about not going back to Ripe. It feels like the right day to say this is probably the end of my own literary Lowry trail.

I have a post about the latest Lowry Lounge event in Liverpool here. It has links (at its end) to accounts of other years, and to the poem 'The Lowry Lounge'.And here you may read my memories of the great Lowry scholar Vik Doyen, who did much to fill those ten years between then and now. There is another volume of Lowry criticism in preparation by the same fine editors, Helen and Bryan. 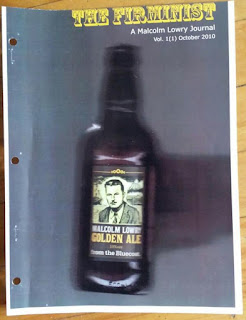