Robert Sheppard and Patricia Farrell: Poems and Images from BAD IDEA published in Monitor on Racism


I’m pleased to say that the first three poems from Bad Idea to be published have now appeared in Monitor on Racism. Here and here. Thanks James and Monica. (That's the team; see here.)

Amid many important articles on the varieties and modes of racism, I hope my humble skits on Brexit still have something to say (in the limited, contextual way poetry can) about our world today. Patricia Farrell’s two images of Bo (who appears in Bad Idea and in previous parts of ‘The English Strain Project’) are Here and here too. 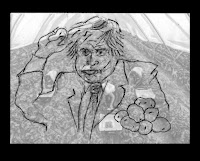 As Poem X here explains, in a way, this second book of The English Strain, entitled Bad Idea, is a re-working of the whole of Michael Drayton’s sonnet sequence Idea; that’s 64 poems by the way (with the addition of its ‘Address to the Reader of these Sonnets’). I’ve been at it since July 2018, one a week (more or less). I note I date the sequence as published 1611. The final edition (he revised it a lot) appeared in 1619: it just dawned on my yesterday, that that's 400 years ago!
I write a little on this project here, commenting on the project at about a third of the way in.

https://robertsheppard.blogspot.com/2018/12/robert-sheppard-my-latest-write-through.html
[Update 2021: I’m delighted to announce that Bad Idea is available NOW from Alec Newman’s excellent press Knives Forks and Spoons, with a cover design by Patricia Farrell. You may get it HERE:  https://www.knivesforksandspoonspress.co.uk/product-page/bad-idea-by-robert-sheppard-102-pages ] 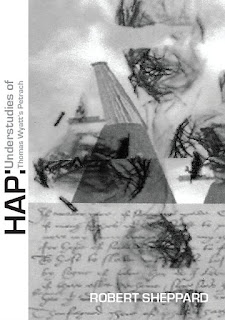 My sonnets from an earlier ‘Brexit’ sequence (Bo's there too!) Hap: Understudies of Thomas Wyatt’s Petrarch is now published;

see here: https://robertsheppard.blogspot.com/2018/10/robert-sheppard-hap-understudies-of.html
and is available from Knives Forks and Spoons here:


Taking only the sonnets Wyatt ‘translated’ from Petrarch, but adding a few of my own, I’ve merged the historical Wyatt with his hysterical contemporary analogue, a reluctant civil servant of a corrupt administration. His world fluxes between Henrician terror, administered by Cromwell, and something like our own reality, administered from inside Boris Johnson’s foreign office. 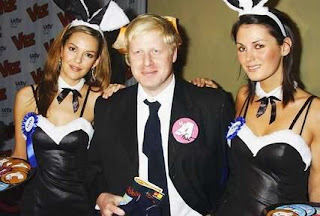 ‘This poem is the un-perished part of another,
and behind that, the other poem, the one in foreign,
as behind Theresa May there squats the succubus
of Thatcher, donning the rubber masks of Englishness.’

Tom Jenks writes of the book: ‘We need our ghosts more than ever. Robert Sheppard rouses Sir Thomas Wyatt, pioneering English sonneteer, from unquiet slumber and drops him blinking into Brexit Britain. Tudor insider, rumoured lover of Anne Boleyn, Wyatt now plies his poetic trade in the dysfunctional dynasty of Theresa May, a court characterised by its surfeit of jesters. Informed but not limited by its origins, HAP is a work of wit, verve and skill, doing to Wyatt what Wyatt did to Petrarch: recontextualising and rebooting by transformative translation. This book should be shot into space as a record of our interesting times, preferably in Alexander Boris de Pfeffel Johnson’s trouser pocket.’

You may read about the whole ‘English Strain’ project in a post that has links to some other accounts, and earlier parts, of this work: here. That was 100 poems long. But I didn’t stop there though, as you can see.

Posted by Robert Sheppard at 12:53 pm