The Innovative Sonnet Sequence: Five of 14: The Code of the West De-coded 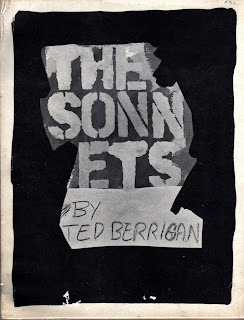 One of the pleasures of Ted Berrigan’s Sonnets is that we read them as form. Part of this comes from the fact that the major, but not the sole, technique – collage – is foregrounded and becomes the formal theme of our reading. They are ‘built rather than written’ Ron Padgett says, quoting Berrigan; he used glue. One sonnet is a complete re-arrangement of another line by line. In poetry, repetition usually provides thematic emphasis although (in choral and anaphoric instances) it can provide musicality and structural form. But in Berrigan’s Sonnets, ‘Dear Marge, hello. It is 5.15 a.m.’ is pleasurably encountered four times; it is one of the instances where form is made from meanings. But we also encounter variations entangled with other variations. ‘Dear Chris, hello. It is 5.15 a. m./ I rage in a blue shirt at a brown desk' is just one appearance of stark colours attached to various objects across the 88 poems. Later we read ‘my dream a crumpled horn/my dream DEAR CHRIS, hello. It is 5:15 a.m./The academy of my dreams is opening its doors’; this last sentence is a repeated (mis-)quotation from Ashbery. (73) ‘My dream DEAR CHRIS hello. It is 3:17 a.m. ‘(74), leads to the valedictory ventriloquism of Prospero’s renunciation in ‘A Final Sonnet’ (for Chris):

I’ll break
My staff bury it certain fathoms in the earth
And deeper than did ever plummet sound
I’ll drown my book.
It is 5:15 a.m. Dear Chris, hello.

(The spacing is inaccurate in this posting.)

We track these phrases “‘taking form”, “forming”, “loosing form” in Derek Attridge’s words, and finally making form. But the wildness of collage is undertaken in the ‘little room’ of the sonnet to concentrated effect. The very repetition of the sonnet sequence contains the repetitions and variations we find within each poem and we experience the traditional sonnet pleasure of aesthetic encounter with an overall structural rhythm (however staccato in this instance) of presentation and silence, presence and absence, like listening to Bach’s Goldberg Variations all the way through. The frames take form, form before our eyes from fragments, and loose form (one ‘sonnet’ bears little resemblance to the frame). ‘The line enjambments, the twisting of syntax, the “push-pull” of meaning, the abrupt changes of tone, the dislocation of punctuation, the fading in and out of prosody, the intentional misuse of parts of speech, the aesthetic decisions as to when to accept the results of a chance operation or to discard them,’ as Ron Padgett inventorizes the inventions of the sequence, –‘these should not be overlooked in favour of colourful subject matter, a subject matter that (like Shakespeare’s) involves a love-triangle. Never mind the sex, or the Libbie Rifkin line that the poems were motivated by Berrigan ingratiating himself before the first Generation New York school through homage, quotation and obliteration. (Remember that Gerard Malanga photo with Ashbery? Berrigan has his hand over Ashbery’s face!) Whatever the concern with ‘the micropolitics of the New York poetry scene’ The Sonnets are ‘a series of “machines”, selections from found materials organized by the mechanics of Berrigan’s inspiration,’ notes Renny Pritikin. One inspiration was the work of his friends. One sonnet opens: ‘In Joe Brainard’s collage its white arrow,’ (14) but collage effects (cut up) interrupt the poem at this point (the lines are clearly re-arranged, or juggled because another sonnet presents the ‘correct’ version.) He plundered Brainard’s journal, he cut up his own poems, including traditional and parodic sonnets, and was influenced by the whole eclectic ‘tradition’ of Dada-New York art practice that could be accessed in the early sixties, including the chance procedures of Cage. No wonder ‘his method is notable for its combination of intuitive and arbitrary procedures’. All this contributes to the sequence’s glorious self-referring quality. The sheer power of this often casually constructed sequence probably derives from the casual belatedness of Berrigan’s position. When Frank O’Hara began a poem ‘It is 12:10 in New York’ it probably was. By the time Berrigan is cutting up text, it wasn’t ‘5.15’ or whatever. We know that Berrigan was drawing structural homologies from science, Whitehead’s process philosophy in particular. But this relativity of time appears as an arguable encoding of space-time at the structural level of collage which, I argue, is not simply form at all, since it is the subject of the poems. They are sonnets about sonnets taking form, loosing form, finding form, making themselves in front of us. I know of no other sonnet sequence where we feel the excitement of its forming as we per-form it on our reading.

Posted by Robert Sheppard at 10:20 am