The Innovative Sonnet Sequence: One of 14 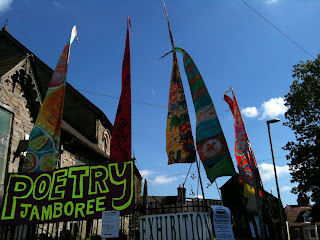 This lecture was delivered at the Hay Poetry Jamboree 2011 at the Oriel Contemporary Art Gallery, Salem Chapel, Bell Bank, Hay on Wye on June 4th 2011. The organisers were John Goodby (who also took the above shot) and Lyndon Davies (whose website http://lyndondavies.co.uk/ is linked to below). See also Van Valckenborch's latest prose on Lyndon's magazine Junction Box.


Here are some links to photos of the event and here is the lecture. It is in 14 parts, in deference to the sonnet, and I will post the parts one a day for the next fortnight, also with gestures toward the form.


One of 14
This lecture is in 14 parts, in homage to, and in parody of, the sonnet, which is its subject. It therefore formally encodes the ambivalence towards the form found in the sonnet-like and sonnet-aspirant and sonnet-deviant productions of its most recent avant-garde practitioners and pasticheurs (many of them collected in The Reality Street Book of Sonnets, which appeared in 2008, edited by an admirable collector and producer of the species, Jeff Hilson). In drawing attention to the central defining numerical feature of its structure this ‘sonnet-lecture’ is emblematically drawing attention to form itself, and to notions of forms and forming with which I am currently working as a critic. The sonnet seems an obvious place to ask questions of such a kind, because the forms of individual poems are formed within (or at least in readerly expectation of, or in relation to) a particular (and historically determined and available) form. My use here of ‘forms’ to refer to the shapes of individual poems, of ‘forming’ to refer to the process by which a literary work happens, and of ‘form’ to refer to the quasi-Platonic form of the sonnet in general, I hope, is enough to warrant my interest in, and my dwelling upon, such formal questions, in what otherwise could have been an uninhibited romp through the undoubted glories of the innovative sonnet. I shall be asking questions, sometimes theoretical, sometimes speculative, about form in general, and certain forms in particular; I shall be focussing briefly upon the sonnet sequences of Berrigan, Raworth, Jeff Hilson, Philip Terry, Geraldine Monk and Sophie Robinson.

As a poet I’ve innovated in the sonnet form in ways I’d like to share in the hope that I’ve got things to say from the inside, as it were. About 136 of my poems – to my surprise – might be considered sonnets and certain others take 14 lines to exhaust themselves. This brief sortie into ‘practice-led research’ is cognate with another of my interests, the discourse of poetics as a writerly and speculative twin to practice, and as a new object of study for criticism itself. Hilson’s anthology alone indicates that the recent pull towards the sonnet has been international but I shall be mainly concentrating upon British linguistically innovative poetry.

Here are raw links to the posts, arranged themselves as a sonnet:


Update September 2016: For those who can buy The Meaning of Form in Contemporary Innovative Poetry, in which there is a chapter on the innovative sonnet, or who can order it for libraries, here are the places

Posted by Robert Sheppard at 2:26 pm