The Innovative Sonnet Sequence: Nine of 14: Kick Him in the Assarts! 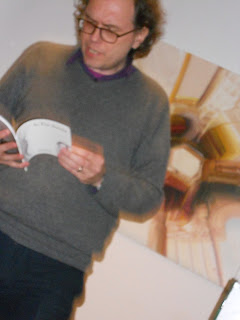 If Berrigan’s sonnets are about themselves, Hilson’s In The Assarts are sonnets that take as burden the history of the form, including Berrigan’s. The excessive brio, the collagic inconsequentiality, the use of strategic repetition and variation, are indebted to Berrigan, but many of the poems are haunted by Sir Thomas Wyatt and the narrator uneasily identifies with him. All these points are demonstrated in poem 32 (out of the 71):

When I grow up I want to be
I Thomas Wyatt & hang around
the stately homes of England.
I am not in this dance
the little necks of England
slipp’d & crown’d
so long Anne Boleyn you spoil’d
my holiday theory of value.
How to explain the flowers to
I Thomas Wyatt when I was rescu’d by
her falling
head on my moustache.
O Anne Boleyn was there room in
the room that you room’d in?

The concluding question (a couplet) is one of Berrigan’s most famous repetitions, itself a repetition of one of Gertrude Stein’s own repetitions. Of course, the room here may be the cell Boleyn is confined to before beheading, an act comically referred to, or the space of the sonnet itself. Wyatt ‘seems to have become involved with’ Boleyn at Court around 1525 ‘until warned off by the obvious infatuation of Henry VIII with her’, and indeed he wrote her love poems in prison (as Spiller says). The ‘holiday theory of value’ seems to hint at the leisured luxury of the court, which her death ‘spoil’d’ by complication. The sonnet is a courtly form in both ideal and real senses: ‘O Anne Boleyn I made your head/ into an Italian sonnet’ poem 34 boasts or laments.

The ‘terrible terrible assarts’ of the title refer to forest clearances (with attendant dispossession) to create the ‘lovely moats’ and the ‘shiny turret(s)’ of courtly tat. ‘Farewell, Love, and all they lawns forever,’ Wyatt is misquoted in the epigraph to the sequence, a posthumous slip of his tongue which equates love with court more materially than his original word ‘laws’ (not ‘lawns’). But this is a cleared landscape (‘yr grim square poems’ suggest a topological equivalence) that depends upon language for its construction; ‘look at my dead misspelt horse’ is yet another of the sequence’s studied imperfections, badnesses. Grammatical de-cohesion is another. These cleared spaces fill with the detritus of the modern world, often in transformative sequence: outdated pop stars Donovan, the Kinks, Mike Oldfield, appear in what looks like a decontextualised autobiographical pageant. In a knowingly post-Language poetry environment (‘my home is in thy American tree/ (language realism poesie’)) anything can happen; Wyatt is confused with James Bond (presumably playing on the fact that Wyatt may have spied for Henry): ‘O to go to London to recreate 1966’, or: ‘that’s the sound of Cromwell kissing/ not a genuine face’. In the beautiful Veer edition of 2010 the poems are indeed square on square pages, the faux-renaissance typeface materially emphasising anachronism and misfit: is it King Stephen or Stephen King who is described thus: ‘he was the worst Bond my lord.’

These external intertextual references of uncertain value and the Berriganesque intratextuality are the semantic shapes (again form can be made with meanings and hints at meanings) which make these poems form in our cumulative encounter with their reiterations. Unstable content is draped parodically across the ghostly historical frames of the 14 lines, and forms can be made even with mistakes and bad lines. As another epigraph to the book states: If ‘a poet comes across with “perfect” sonnet after “perfect” sonnet for any length of time, a sonnet sequence is a bore’. We are never bored in the assarts.
Posted by Robert Sheppard at 12:16 pm