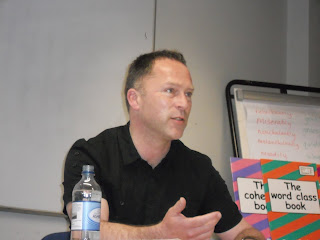 (This is Terry speaking about the sonnets at Edge Hill University to the Poetry and Poetics Research Group earlier this year.)


In a nutshell, Shakespeare’s ‘argument’ and one of Philip Terry’s major techniques are both exemplified by the respective first lines of their sequences. In Shakespeare’s Shakespeare’s Sonnets (!) the theme of carpe diem is expressed in terms of the threat and regret of vanishing potential beauty (‘From fairest creatures we desire increase’), whereas Philip Terry’s Shakespeare’s Sonnets opens with a comic echo of that ‘desire’, an epigrammatic imperative of our postmodern age of ageless celebrities enhanced by cosmetic mummification or permanent genetic modification: ‘Clone Kylie.’ However parodic they might be, Shakespeare’s central theme of the impermanence of beauty shows through these poems: ‘We test the best non-surgical skin fixers/ With time’s injurious hand,’ begins another poem. (At least they aren’t tested on animals!) A further version of this sonnet, number 63 of Shakespeare’s, which originally opened, ‘Against my love shall be, as I am now,/ With Time’s injurious hand crusht and o’erworn’, becomes in Terry’s adaptation: ‘Against my love shall be an immense ballroom,/ With time’s injurious hand jive’. Anyone can see that Terry is ‘updating’ the sonnet with regards to the entropic nature of Time, but not everybody knows that ‘Up to Date’ is one of the simpler Oulipo constraints. These poems are also examples of the ‘Chimera’ constraint where one text is filled with the vocabulary of an alien one. Terry has taken on most of Shakespeare’s sonnets (some in multiple versions), with a variety of techniques, which owes much to Raymond Queneau’s Exercises in Style in which one event is re-narrated endlessly and to Harry Mathews’ ‘Trial Impressions’ in which one Dowland song is re-versioned. (When questioned on my ‘favourite’ poem, I cite this example from Mathews.) My exposition could turn into a list of the Oulipo techniques Terry has used (but Terry provides his own. See also his own account of the project here). More important than enumeration is the fact that built into the Oulipo venture is the ‘clinamen’, the Lucretian swerve that throws an irrational spanner into the rational literary work, in short, something that fucks up the system. I asked Terry recently what his clinamen was; he replied, ‘I don’t use any of the constraints consistently.’ System does a duck-rabbit flip into invention.


Here is a straightforward but irresistible re-writing of a well-known sonnet, one also taken on by Harryette Mullen in the Reality Street anthology. Already parodic in Shakespeare’s hands of the worst rhetoric of the sonnet craze, sonnet 130, ‘My mistress’ eyes are nothing like the sun’, re-appears in Mullen’s versions as: ‘My honeybunch’s peepers are nothing like neon’ and ‘My Mickey Mouse ears are nothing like sonar’. (I always think of Nicholas Moore’s Spleen when I see this level of versioning.) And, of course, Shakespeare elsewhere gently mocks one of the seven ages of man: ‘the lover/ Sighing like a furnace, with a woeful ballad/ Made to his mistress’ eyebrow.’ For Terry, then, the demand is to be particularly inventive and to aim lower than the brows:


My mistress’ eyesores are nothing like stalagmites;
Copper is not as green as her teeth.
If sodium be white, why then her brie is blue;
If hairs be wires, pylons grow on her head.
I have seen rot, dry and wet,
But no such rot as I see in her cheeks;
And in some petrol is there more delight
Than in the breath that from my mistress reeks.
I can’t stand her jabbering,
The dentist’s drill hath a far more pleasing sound.
I never saw her get off her fat arse
Except to go and stuff her face.
And yet, while I hate her, I can’t let go,
I’m in deep shit, like those dudes in the Inferno.

All of the poems exist against their Ur-text; the ‘by heaven’ of Shakespeare’s final couplet becomes the antonymic reference to Hell in the version. The originals are de-formed, they loose form in the restless versionings of Terry’s book, and the new form that emerges in our encounter with the page is actually the perceived and received difference between the original (or what is recalled of it, or what it assumed of it) and the version. Form keeps the meanings spinning. The version never quite feels the final word, the total content, but a manifestation of a formal choice that could have been otherwise. After all, the Oulipo is a workshop of potential literature.

Posted by Robert Sheppard at 12:47 pm