The Innovative Sonnet Sequence: Twelve of 14: Put them in the Margins 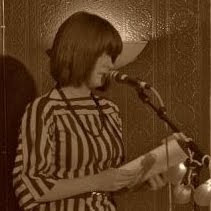 
Sophie Robinson is the youngest poet in the anthology, as she is also in Carrie Etter’s Infinite Difference, where she describes her attitude to innovation: ‘I don’t believe that an experimental poetics must necessarily be devoid of emotion, sentiment, biography, self-expression, &c’, and she names Frank O’Hara and Bernadette Mayer as two ‘cherished’ exemplars (the latter being one of the most accomplished of post-Berrigan sonneteers). Nevertheless her 10 poem sequence ‘geometries’ is one of the obviously radical texts in the Reality Street Book, in that it plays visually with the sonnet form. In this she is not alone: there are many texts in the book making formal play in ways in which the frame becomes its own content, and many of these ways are defined in terms of visual rather than verbal or metrical innovation. Allusions to the frame occur in Bob Cobbing’s concrete poetry inkscape ‘Sunnet’, where the white space of the Petrachan turn becomes the horizon on the landscape (or inkscape) hinted at in the title. (frontispiece) The moon is caught in May Ellen Solt’s ‘Moon Shot Sonnet’, where the empty grids of lunar cartography pun with the divisions of the Petrachan sonnet. David Miller’s sequence of horizontal Chinese brushstrokes (‘Untitled (Visual Sonnet)’ each is called) obviously mimes the frame of the sonnet, but also, with their varying thickness, texture and curves, they hint at the varying content that is carried across the traditional sonnet sequence, here represented by the uniqueness of Chinese brush-work. Jen Bervin’s conceptual writing project ‘Nets’ (the title itself cuts the word ‘sonnets’ down to size) presents Shakespeare’s Sonnets in greyscale and highlights certain words to configure a new text over them. This is a much-used technique (John Gibbens uses it for ‘Underscore’ here), but it rare to leave the original text legible alongside (under) the variations to foreground their material; like Terry, Bervin operates upon the most canonical sonnets. Paul Dutton’s ‘so’net’ sequences uses anagrams on, and other words derived from ‘sonnet’ – as does Keith Jebb in his title ‘tonnes’ – to contrast a text that hovers between sense (‘on sense sonnets not sent to text’) and non-sense and pure sound concrete poetry for performance. Visual recognition of ‘sonnetness’ is important to the aesthetic effect of these examples, which in various ways involve the simultaneous use and unravelling of the historical frame of the sonnet (and by extension many of the meanings that have accrued to it), to turn the adventures of its form into its own subject while embodying its latest adventures in formal investigation and innovation.


Robinson’s ‘Geometries’ takes the frame of the sonnet and makes it square, more radically than Hilson’s but less consistently formal than the above examples, utilising the justified margins of the WP package to ensure a ‘geometry’ that has nothing to do with metrical contour or word count or the temporality of delivery. The resultant squares work against our reading patterns; continuous margins suggest the forms and conventions of prose. The 14 lines are ‘stretched’ in ways unrelated to notions of lineation or layout, open field or otherwise. (I have unfortunately not been able to reproduce that effect here; the absence of this formal adjustment demonstrates just how significant, even signifying, this is. Wihtout this formal constraint the poem below looks wrong, but unavoidable.) However, Robinson’s reluctance to abandon reference and significance, let alone the personal, rather than undermining this formal play, creates a tension between reading for form (which is unavoidable in these geometries, particularly when 3 words ‘arms and head’ become one, for example) and reading to catch the teasing but often angry voices of the poems, one of which has a literal lower case ‘i’ recommended by Kathleen Fraser to represent its reduced subjectivity (at the start of a line where most of the other lines carry a capital), although the inverted commas point to its artifice also:

Beauty is nothing is nothing is a
Gently disgusting residue of all
That burps and smiles & life is terrible &
Holds back & swallows itself whilst 25
Birds that might’ve perched on your arms&head
Can now fly in expanded air and yeah
the autumn’s going to need you w/
head like a broken toy & got no stable
‘i’ got no stable now all is fluttering
Around & the boredom of death O how
We breathe you out like blah sad & longing
For an airy exchange amongst urgent
Squeaky-clean majorities & CITY BOYS
Those smug wankers we put them in the margins.

The margins into which mainstream culture is ‘put’ are in some sense the margins of this poem, but the voice is angry enough here, however unstable the ego. If ‘Beauty is nothing’, a ‘disgusting residue’, at least it is ‘gentle’. Terrible life consumes itself, the boredom of death results in meaningless ‘blah’ and the ‘sad & longing’ mourning that lies behind this immediate anger (the poems are bitterly elegiac). Only the birds (which appear in other ‘geometries’) offer transcendence, an ‘airy exchange’ that is longed for.


The true liberation here is formal. These poems are prosodically arbitrary, constitute even an ‘aprosody’ (as Agamben puts it rather suggestively in what is virtually an aside on the poetry of Caproni). Yet they are still forms which work by de-forming accepted reading assumptions in the ways I’ve just described. Perhaps they register the gradual re-forming of contemporary forms of poetry from the temporal axis to the spatial axis.

Posted by Robert Sheppard at 11:15 am