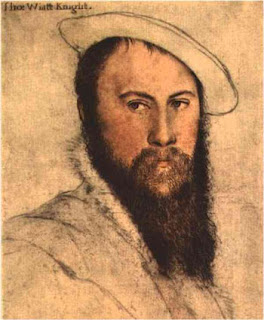 Historically the sonnet is the perfectly formed bastard child of Occidental troubadour ballads, and it comes to early maturity and fecundity in the hands of Petrarch in the fourteenth century, whose name we now give to one of the two characteristic forms of the sonnet, the 14 lines in the proportion of 8 to six, with a volta or turn at line eight. The form came into English through the adaptations of Petrach by Sir Thomas Wyatt in the early sixteenth century, (See his portrait above and poems here.) . The fame of Shakespeare’s Sonnets, and whose name is given to the form where the turn moves to the concluding couplet of the poem, obscures the widespread practice of the sonnet in its heyday between 1580 and 1610. It reached the level of a craze in the 1590s, following the posthumous publication of Sidney’s Astrophil and Stella (1591) which, according to Jonathan Bate played a ‘foundational role’ in the craze. Some of Shakespeare’s ‘sugared sonnets’ were published unauthorised during the craze; others may have been written later, but Shakespeare (or his publisher) waited until the theatres were closed by plague in 1609 to prepare a full volume. The sonnet has remained a popular form with a dip in its use during the eighteenth century and its virtual prohibition under Modernism, a fact to which I shall return.

‘We’ll build in sonnets pretty roomes’, writes John Donne (no mean sonneteer himself), punning on the original meaning of stanza as room, and pointing out, by analogy with architecture, the sonnets neatness as form. A ‘prescribed form’ whose ‘duration as well as the structure of the whole poem is predetermined,’ as Michael Spiller puts it, the sonnet is asymmetrical like the haiku, the turn torques the discourse after midpoint. In its 8+6 (octet and sestet) form, Spiller says, ‘The verbal recognition of’ what may have originally been ‘(a) musical alteration is first of all syntactic: a new sentence at the change, or perhaps a medial pause in a long sentence. But this in turn begets a conceptual alteration, turning proportionality of lengths into consequentiality of thought. Six to eight as conclusion is to proposition, or as development and summing up is to statement.’ Even in this abstract frame one can see how this form at least thinks, in terms of its predisposition to contentual structure: ‘consequentiality of thought’. One can even see that form here is a kind of content. Spiller adds, underlying this point, turning to the other major sonnet frame: ‘When the final couplet became popular in English sonnet-writing, the alternative 4+4+4+2 grouping emerges, to drive British poets into a rhyming couplet ending, with strong pressure towards epigram or witticism.’ Bate summarises the difference in effect: ‘Whereas the Italian style favoured a single thought with a turn in the middle, the English encouraged more playful variation: three thrusts and twist in the tail. The very form offered an incentive to multiplication and digression that encouraged sonnets to be expressions of their authors’ wit and ingenuity as much as – perhaps more than – outpourings of their real feelings.’ The sonneteers at least ‘respond(ed) to forms as a kind of content’ (as Wolfson puts it).


The sonnet became a courtly form, first as ‘the voice of the articulate citizens of the city states’ of Italy, and in England through the ‘courtly makers’ as Puttenham calls Wyatt and Surrey : ‘They greatly polished our rude and homely manner of vulgar Poesie,’ he opined. ‘Wyatt and Surrey created an intimate relationship between the arts of courtship and courtiership. This made it possible to read apparent love poems as coded bids for patronage and preferment at court.’ Every courtier was expected to bash out a sonnet.

Petrarch’s longing poems for Laura, Surrey’s for Geraldine, Sidney’s for Stella, all place their ‘pleading or praising or lamenting’ narrators as heirs to a Neoplatonic ethos, ‘that love is at once the most dislocating of human feelings and the one which most strongly impels the heart to “gentilezza”, that quality at the centre of ideal courtly behaviour’, whereas real courtly behaviour and its actual sonneteers gave a ‘performance’ of wit: ‘One is performing for an audience, moving in and out of a series of poses, and watching one’s own performance … The aim is not truth, but delight.’ It did not delight all who beheld this ‘behaviour’: When the Earl of Essex should have been concentrating upon Irish genocide as bidden by his sovereign at the height of sonnet-mania, Henry Wootten complained that he ‘spent his time “evaporat(ing) his thoughts in a sonnet”.’ It is ironical that this last vestige of English chivalric behaviour died when Essex’s courtly plot ended ignominiously in his execution. His reading for form, we might say, with irony but not without some justification, was fatal!

Posted by Robert Sheppard at 9:51 am